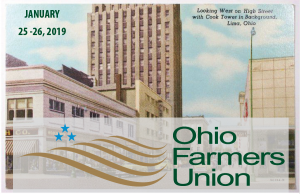 For the first time in recent memory, the Ohio Farmers Union Annual Convention will be held outside of Columbus in 2019.

“We love Columbus, we know it’s the center of the state, but as we did last year with our beginning farmer programming, we continue to look for ways to bring the organization closer to folks – we think taking the convention on the road is a good idea.”

Sylvester said discussions about making changes to the convention have been ongoing for the past two years at the OFU Board and Executive Committee level.

OFU leaders want to maintain the importance of the annual meeting to the organization’s annual policy goals and business activities, but continue to seek ways to introduce – or re-introduce in some cases – OFU to potential new members.

“We looked at the whole state and discussed the benefits of having the convention in places like Cleveland, Toledo, Columbus and elsewhere,” Sylvester said.

“We chose Lima for several reasons, but it’s proximity to prime farm country, it’s ability to handle a meeting of our size and the fact that it’s near the Maumee Watershed which will continue to be a policy priority in 2019 made the difference.”

“Members and delegates are going to find a fantastic venue with all the amenites we’ve had in Columbus – including an indoor pool, lounge, workout facilities and close proximity to attractions like the Lincoln Park Railway exhibit, the Armstrong Air and Space Museum in nearby Wapokaneta and the Allen County Museum.

Sylvester said more details will be forthcoming at local Farmers Union meetings and in a December edition of the Ohio Country Messenger. He reminds members that they may register for and attend the convention, but to be a delegate, they should contact their local organization’s president for details on delegate selection.

“We may be changing locations this year, but members and delegates may rest assured that we’ll have a full slate of speakers, programming and a special Friday night banquet,” Sylvester said.

Annual Policy Priorities For the eighty-eighth year, the Ohio Farmers Union has established the organization's public policy priorities at the … END_OF_DOCUMENT_TOKEN_TO_BE_REPLACED

It's looking great for the first full, uninterrupted Ohio fair season since the beginning of the pandemic. Of special note, the Ohio State Fair will … END_OF_DOCUMENT_TOKEN_TO_BE_REPLACED

In a pleasant surprise for rural Ohio, the biennial budget was agreed to Monday with Gov. Mike DeWine's full $250 million funding request for rural … END_OF_DOCUMENT_TOKEN_TO_BE_REPLACED