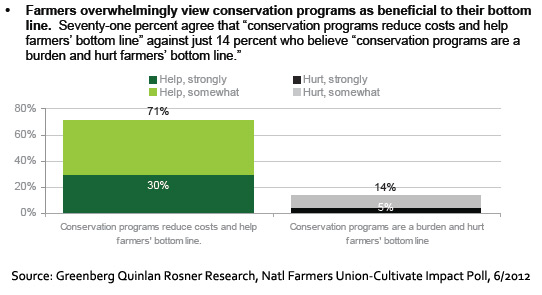 Farmers in the U.S. ‘heartland’ value the conservation programs funded under the current Farm Bill and do not want to see cuts in conservation as Congress debates changes to this cornerstone agricultural legislation, says a poll done on behalf of the National Farmers Union and Cultivate Impact.

Conducted by Greenberg Quninlan Rosner Research and Public Opinion Strategies, a bipartisan polling alliance, the poll surveyed 502 farmers across 13 states in the midwest and upper midwest. Ohio was included in the sample along with other states commonly defined as the “heartland” of U.S. agriculture. Other states in the sample include: IA, IL, IN, KS, MI, MN, MO, ND, NE, OK, SD and WI.

The U.S. Senate passed its version of the Farm Bill in late June moving most of the farmer safety net from a direct payment model to an expanded federal crop insurance program. The National Farmers Union and Ohio Farmers Union is supportive of this move, but would further like to see the safety net moved to the Market Driven Inventory System model.

“The findings of this survey demonstrate the deep commitment to conservation that farmers have across the heartland,” said NFU President Roger Johnson. “As Congress moves forward crafting the farm bill, we would emphasize the importance conservation programs play for farmers both for environmental stewardship and continued productivity.”

NFU worked with Cultivate Impact to produce this poll. Cultivate Impact is a new non-profit project of the Trust for Conservation Innovation specializing in strategic research and program development to help build a future with healthy and profitable farms, plentiful and accessible good food for all, and strong urban and rural communities.

Read a memo from the pollsters with more results here.

In a pleasant surprise for rural Ohio, the biennial budget was agreed to Monday with Gov. Mike DeWine's full $250 million funding request for rural … END_OF_DOCUMENT_TOKEN_TO_BE_REPLACED