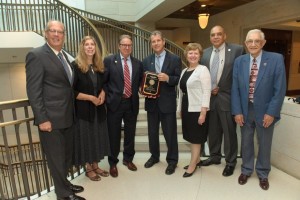 COLUMBUS – Ohio Farmers Union President Joe Logan and a delegation of OFU members have returned to Ohio after a week in Washington, D.C. lobbying members of Congress on Country of Origin Labeling and the pending Trans Pacific Partnership trade pact.

“Recipients of the Golden Triangle Award have been strong advocates for family farmers and ranchers, and support similar principles and policies as Farmers Union,” said NFU President Roger Johnson. “We are pleased to honor those who have proven to be true allies of our organization and family agriculture.”

As for the issues, Logan said that Ohio’s family farmer delegates met with several members of Ohio’s Congressional delegation.

“We urged members to vote “no” on TPP and demand that EPA follow the law on the Renewable Fuel Standard which sets the ethanol blending targets,” he said.

Logan said recent action by the U.S. House to repeal COOL was disappointing. The Senate has not taken up the measure, so OFU members used their time with legislators to explain what Logan calls “the whole story on COOL.”

“Most members of Congress didn’t realize that there is public polling showing that an overwhelming majority of American consumers support knowing where their food comes from. Furthermore, they had no idea that the World Trade Organization’s opposition to U.S. COOL was enacted in an un-democratic and non-transparent process,” Logan said. 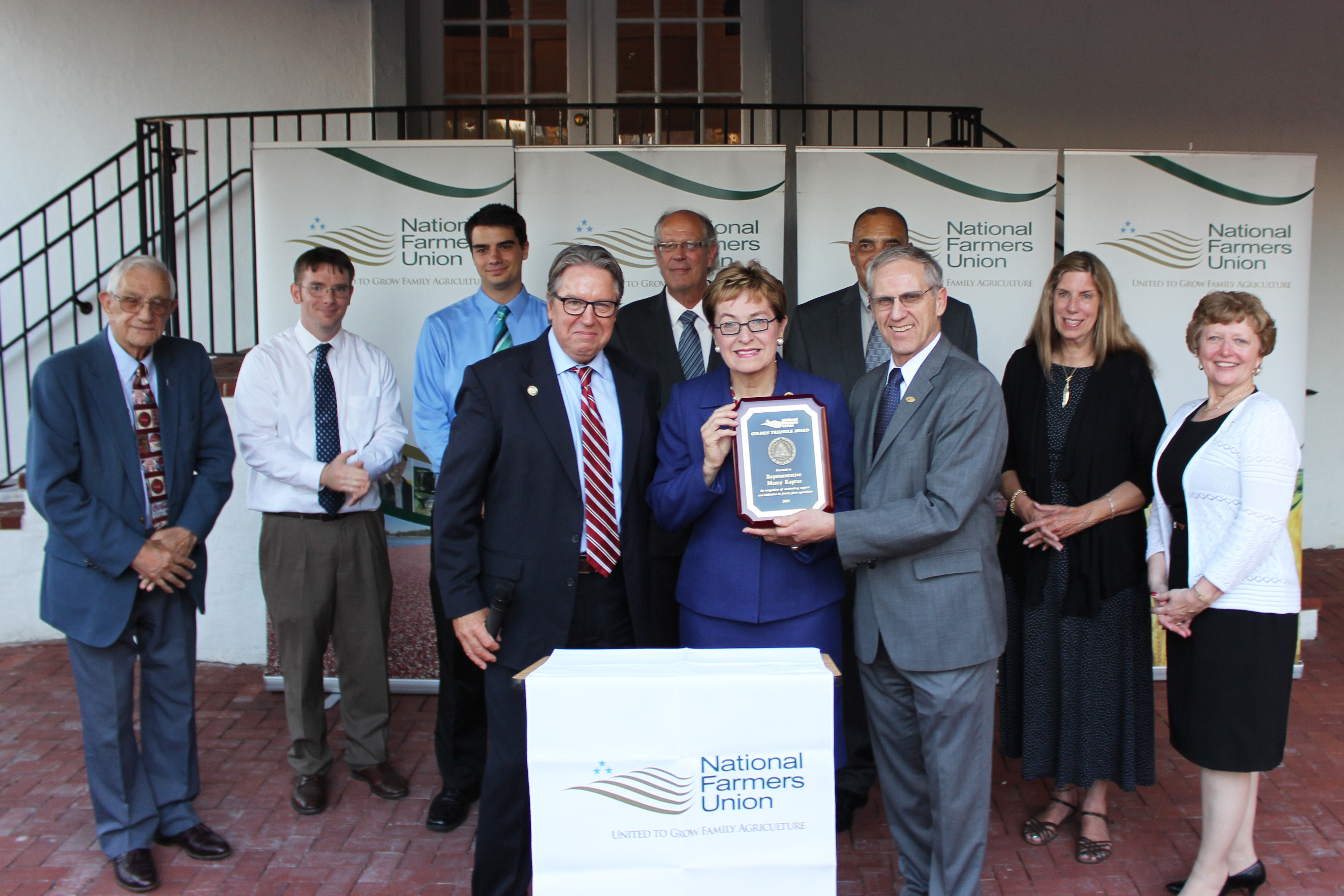 Logan and others made the case that national pork and beef promotion organizations have been captured by an increasingly smaller number of huge trans-national corporations that want to be able to bombard the U.S. market with the lower-priced inferior quality meats from countries like China and Brazil.

“If COOL goes by the wayside, it will be much easier for these big foreign companies to replace U.S. grown and processed meat with beef from Brazil and pork from China,” Logan said.

“Sherrod and Marcy are both long-time supporters of family farmers through thick and thin,” Logan said. “Marcy Kaptur has actually been honored by National Farmers Union more than any other legislator. She is a star for family farmers.”

“For decades, independent farmers in Ohio and throughout the country have suffered hardship and injustice at the hands of the powerful and heavily integrated corporate meat industry,” said Kaptur. “I have learned that the U.S. Department of Agriculture is ready to move forward with long-overdue protections for those farmers. I am humbled to receive this distinguished award from the National Farmers Union, whose work advocating on behalf of independent farmers could not be more critical. But even more importantly, I am gratified that this shared effort has brought us closer than ever to expanding critical protections for our nation’s meat and poultry farmers. Thank you to NFU President Roger Johnson, Ohio Farmer’s Union President Joe Logan, and the many farmers, ranchers, experts and advocates whose sacrifice, sweat and labor made all of this possible.”

“Our state’s prosperity – and economic and energy security – depends on the strength of Ohio’s agriculture sector,” Brown said. “I will continue working alongside Ohio’s farmers and producers to expand market opportunities, maintain a strong and fiscally responsible safety-net, and strengthen rural communities.”

In a pleasant surprise for rural Ohio, the biennial budget was agreed to Monday with Gov. Mike DeWine's full $250 million funding request for rural … END_OF_DOCUMENT_TOKEN_TO_BE_REPLACED