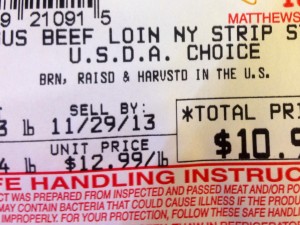 The huge, multi-national packers and processors and their apologists at the National Cattlemen’s Beef Association continue to spread disinformation about Country of Origin Labeling (COOL).

Since the USDA issued its newer, World Trade Organization-compliant COOL requirement here in the U.S., several allies of the industrial livestock industry led by Canada and the National Cattlemen’s Beef Assoc. have filed suit to stop COOL. They are also working behind the scenes in Congress at every opportunity – and further muddying the waters in Farm Bill negotiations – to rollback COOL.

The National and Ohio Farmers Unions support COOL and Americans’ right to know from where their center of their plate originates. The fact is, U.S. food safety standards from farm to grocery store shelf instill confidence in American consumers. We have the right to know if our meat was processed or raised in China or another country where regulations are weak. Many consumers also want to make the economic choice to buy only U.S. raised and processed foods. Without COOL, they are missing an important decision-making tool.

Here are a few facts about COOL that counter some of the arguments being made in opponents’ anti-consumer (and anti-American) campaign:

Annual Policy Priorities For the eighty-eighth year, the Ohio Farmers Union has established the organization's public policy priorities at the … END_OF_DOCUMENT_TOKEN_TO_BE_REPLACED

It's looking great for the first full, uninterrupted Ohio fair season since the beginning of the pandemic. Of special note, the Ohio State Fair will … END_OF_DOCUMENT_TOKEN_TO_BE_REPLACED

In a pleasant surprise for rural Ohio, the biennial budget was agreed to Monday with Gov. Mike DeWine's full $250 million funding request for rural … END_OF_DOCUMENT_TOKEN_TO_BE_REPLACED