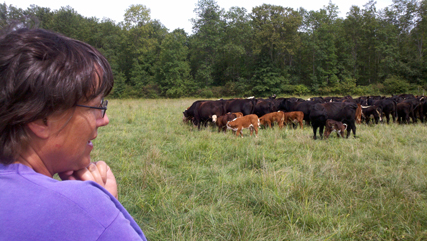 One NRCS program that helps to mitigate environmental degradation and supports small operators who wouldn’t otherwise be able to afford environmentally-friendly improvements to their property is the Environmental Quality Incentives Program (EQIP). I had the opportunity to see EQIP in action at Marshy Meadows Farm near Windsor, Ohio.

Marshy Meadows is a grass-fed beef operation run by Mardy Townsend with the help of her mother Marge. Marge Townsend has been farming since the early 1970s in Ashtabula County. Although Mardy spent part of her varied career in Central America, she came home for good in 2001 to turn Marshy Meadows into the peaceful collection of hills, wetlands and pastures that it is today.

The Townsends are Ohio Farmers Union members of more than 30 years and are devoted to making their farm work economically and ecologically. After getting her master’s degree in agronomy from Ohio State University, Mardy set goals for Marshy Meadows that included assessing the topography of the land and finding the best agricultural fit for the rambling collection of hills, wetlands and valleys.

Mardy chose to abandon the production of crops and began converting fields to grasslands. Previously, erosion had been a problem on the hilly areas of the farm. Grassland holds everything in place and provides prime real estate for the grazing of cattle.

Since 2002, the Marshy Meadows herd has grown to around 130 head of the Hereford-Angus cross Black Baldies. This past spring was a good calving season with 33 calves born without losing a single one.

Converting Marshy Meadows Farm to grassland has been good for the environment in Ashtabula County and provides a way for Mardy to make a living from what she loves – farming. Over the past nine years she has only had to work at off the farm jobs twice as she’s built her business. Her grass-fed beef is also becoming popular in the region. Through the good work of the Geauga Family Farmers Cooperative it has even made its way onto the table at the Cleveland Clinic. 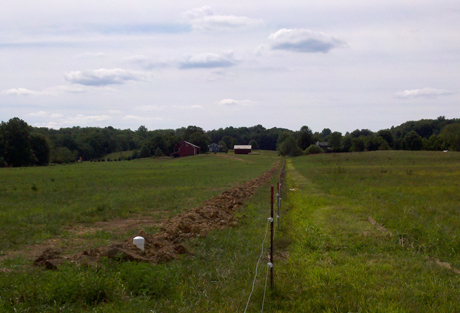 EQIP has been a part of that success. Funding for a system to deliver water to different pastures around the farm has been supported by EQIP grants. From the policy point of view, USDA wanted to help beginning farmers and those willing to be more environmentally conscious with how they use their land. From Mardy’s point of view, she has been able to get needed infrastructure onto the farm much more quickly than she could have without USDA support.

“Implementing a new environmentally friendly practice can be costly and not affordable based on the cash flow of an operation. EQIP helps farmers over this economic hurdle,” Mardy said.

Marshy Meadows also is in the eighth year of a ten year grant program with the Conservation Stewardship program. This is another USDA program that helps defray the costs incurred by using environmentally-friendly practices. The grasslands of Marshy Meadows supports thriving bird populations of eastern meadowlark and bobolink, both of which are in danger due to loss of habitat. CSP payments make up some of the farm income lost by protecting these ground nesting birds’ habitats.

However, Townsend is worried about what she’s hearing from Washington regarding Congressional budget-cutting and just where the budget axe may fall.

Her concern is that across the board draconian cuts at USDA are going to shut down EQIP, making it difficult for farmers to continue to implement environmentally friendly practices at the necessary rate. Also, CSP contracts may not be honored through the end of the contracts. In her case, she said she’s almost through with her contract and she’ll make it financially if funding dries up. She does question the fairness of the federal government entering into contracts with family farmers and subsequently making hurried budget decisions that essentially leave farmers in the lurch.

“(These programs) have been really good in terms of helping move people into a more environmentally way of farming,” said Mardy. “The thing that is bothering me at this point is that I’ve heard that the USDA may not be able to honor (existing) contracts … it seems unfair that if you’ve signed a ten year contract with the government that all this messing around in Washington over the budget could have USDA not honoring its contracts.”

Annual Policy Priorities For the eighty-eighth year, the Ohio Farmers Union has established the organization's public policy priorities at the … END_OF_DOCUMENT_TOKEN_TO_BE_REPLACED

It's looking great for the first full, uninterrupted Ohio fair season since the beginning of the pandemic. Of special note, the Ohio State Fair will … END_OF_DOCUMENT_TOKEN_TO_BE_REPLACED

In a pleasant surprise for rural Ohio, the biennial budget was agreed to Monday with Gov. Mike DeWine's full $250 million funding request for rural … END_OF_DOCUMENT_TOKEN_TO_BE_REPLACED