Overall, economic numbers for agriculture look good despite the drought that plagued much of the country this year. USDA Secretary Tom Vilsack said in a press release:

“Today’s forecast is heartening. It confirms that American farmers and ranchers remained impressively resilient in 2012, even with tough odds due to one of the worst droughts in more than a generation. Thanks to its ability to remain competitive through thick and thin, U.S. agriculture is stronger today than at any time in our nation’s history, supporting and creating good-paying American jobs for millions. While down slightly from the August forecast, today’s estimates for net farm income are the second-highest since the 1970s, while total farm household income is expected to rise. At the same time, the positive trend of falling debt ratios continue. The forecast suggests that strong farm income should remain a positive factor in carrying farmers and ranchers into the 2013 growing season.”

Here are two charts that caught my eye from the report.

First, size matters in today’s agricultural economy. The chart below shows that if your farm is generating less than $250,000 in gross sales, a large portion of your household income is probably coming from off-farm work or another source. The second chart below shows that farm households do a bit bitter in terms of median and mean income as compared with all households. 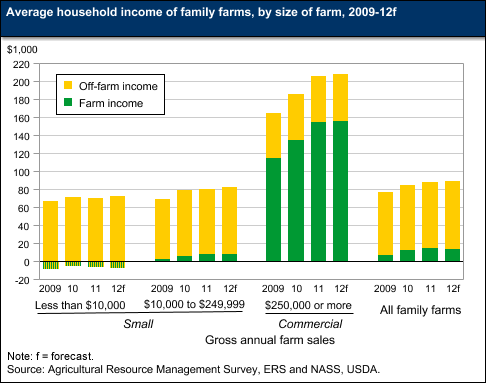 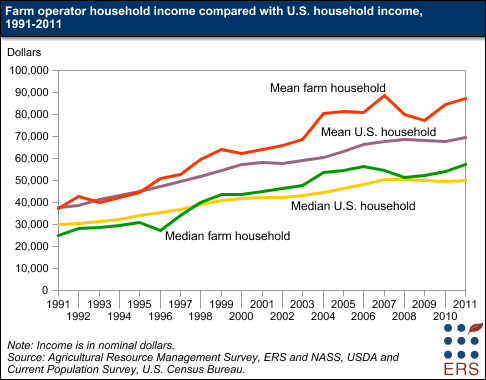 If you want to take a look at more on this topic, visit the Farm Sector Income & Finance pages at USDA ERS.

Annual Policy Priorities For the eighty-eighth year, the Ohio Farmers Union has established the organization's public policy priorities at the … END_OF_DOCUMENT_TOKEN_TO_BE_REPLACED

It's looking great for the first full, uninterrupted Ohio fair season since the beginning of the pandemic. Of special note, the Ohio State Fair will … END_OF_DOCUMENT_TOKEN_TO_BE_REPLACED

In a pleasant surprise for rural Ohio, the biennial budget was agreed to Monday with Gov. Mike DeWine's full $250 million funding request for rural … END_OF_DOCUMENT_TOKEN_TO_BE_REPLACED