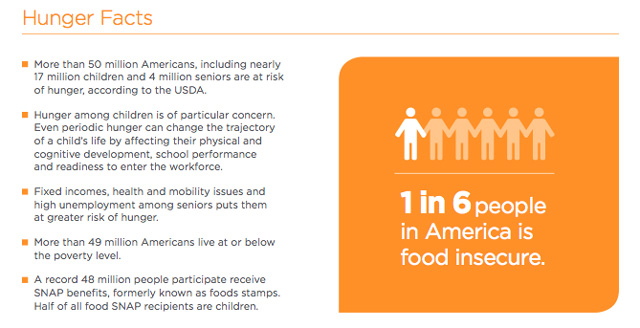 The National Farmers Union is working again this year with Feeding America to raise money to help food banks across the nation. The difference this year is that our fundraising pledge gives Farmers Union members and friends an option to route their donation directly to their local food bank.

NFU, through our state organizations and individual members across the country has pledged to raise $50,000 for Feeding America. As with the past two campaigns, you can donate directly to Feeding America online through NFU’s page on the Feeding America site.

Or, if you prefer to ensure that your donation is used exclusively by your regional foodbank, but still counts for NFU’s pledge, you can do the following:

“For the third consecutive year, Farmers Union members and supporters have pledged to raise $50,000 to benefit Feeding America,” said NFU President Roger Johnson. “The work that Feeding America does directly impacts our rural communities. NFU’s family farmer and rancher members are proud to grow and raise the food that feeds our country, and our commitment to ending hunger in our own communities is a natural extension of that work.”

Annual Policy Priorities For the eighty-eighth year, the Ohio Farmers Union has established the organization's public policy priorities at the … END_OF_DOCUMENT_TOKEN_TO_BE_REPLACED

It's looking great for the first full, uninterrupted Ohio fair season since the beginning of the pandemic. Of special note, the Ohio State Fair will … END_OF_DOCUMENT_TOKEN_TO_BE_REPLACED

In a pleasant surprise for rural Ohio, the biennial budget was agreed to Monday with Gov. Mike DeWine's full $250 million funding request for rural … END_OF_DOCUMENT_TOKEN_TO_BE_REPLACED