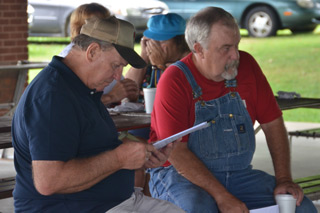 In late November, the Ohio Farmers Union lost a great member, leader and friend in Steve Elliott. Steve was president of the Marion County Farmers Union and an active member of the Ohio Farmers Union board of directors. He could always be counted on to participate in Farmers Union events and meetings. He was an organic farmer and worked his farm along with his brother. Many of us will remember Steve – in his bib overalls – quick to dispense his dry wit and often seeing a side of an issue that everyone else in the room had missed.

His obituary follows below:

Steven A. Elliott, age 57, of LaRue, died Sunday morning November 23, 2014 at his residence. He was born September 2, 1957 in Marion to the late Earl L. and Bernice Marie (Robinson) Elliott.

He is survived by one brother; Earl D. (Janet) Elliott of LaRue and one sister; Delores A. (Roy) Rinehart of Alvada, Ohio. Three nieces and five nephews.

Steve was president of the Marion County Farmers Union. He was on the Board of Directors of the International Organic Crop Improvement Assn. and was treasurer of the local chapter of that organization. Member of the LaRue Community Alliance. He was very willing to help out with anything or anyone about organic farming.

Memorial services were held November 28, 2014 at the Stofcheck-Ballinger Funeral Home in LaRue, Ohio.

Those who wish may make contributions to the LaRue Baptist Church 217 N. High St. LaRue, Ohio 43332.

Remembrances and Condolences may be expressed at www.stofcheck-ballinger.com.

In a pleasant surprise for rural Ohio, the biennial budget was agreed to Monday with Gov. Mike DeWine's full $250 million funding request for rural … END_OF_DOCUMENT_TOKEN_TO_BE_REPLACED