The  Ohio Farmers Union pursues public policy that supports the family farmer and consumers. We support and advocate on behalf of legislation which recognizes the unique market realities of family farmers. Bigger is not always better and consumers benefit from robust local farming economies which support locally grown and produced food and fiber.

Whether you are a farm family or a consumer concerned about what’s on your table, we’re sure you’ll find one of our issues in which you can get involved.

How OFU Advocates on the State and National Levels 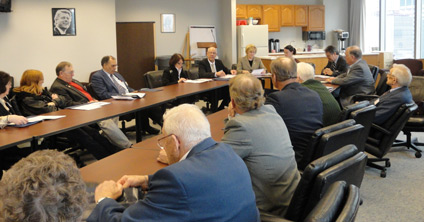 Ohio Farmers Union has a rich history of legislative lobbying on behalf of Ohio farm families and consumers in our state capital of Columbus. OFU maintains a state legislative office just across the street from the Capitol. Through our legislative office we identify and track key legislation that affects agriculture, rural communities, consumer interests, the  environment and tax policy among others. We also interact with various state agencies including the Ohio Department of Agriculture, the Ohio EPA and the Ohio Department of Natural Resources. We are the voice of our members in Columbus.

Our activities include visits with legislators, meetings with state agencies, providing legislative testimony during bill and rules making hearings and connecting our members with their legislators. We also cooperate with various other public interest groups such as the Ohio Environmental Council. OFU’s 2011 state and national policy document is discussed and ratified at our state convention each January.

On the national level, OFU is ably represented by the National Farmers Union. We are one of 32 state or regional members of NFU. You can learn more about NFU’s current priorities at their website, but you may be interested in this blog post with links to NFU’s 2013 Policy Document and special orders of business.

Annual Policy Priorities For the eighty-eighth year, the Ohio Farmers Union has established the organization's public policy priorities at the … END_OF_DOCUMENT_TOKEN_TO_BE_REPLACED

It's looking great for the first full, uninterrupted Ohio fair season since the beginning of the pandemic. Of special note, the Ohio State Fair will … END_OF_DOCUMENT_TOKEN_TO_BE_REPLACED

In a pleasant surprise for rural Ohio, the biennial budget was agreed to Monday with Gov. Mike DeWine's full $250 million funding request for rural … END_OF_DOCUMENT_TOKEN_TO_BE_REPLACED