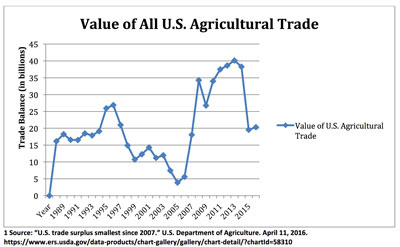 The National Farmers Union released today public comments it has made to the Trump Administration regarding re-negotiation of the North American Free Trade Agreement.

In public comments submitted today to U.S. Trade Representative Robert Lighthizer, Johnson highlighted the shortcomings of the United States’ current free trade paradigm, citing its contribution to the massive U.S. trade deficit and abandonment of U.S. sovereignty to the detriment of farming and rural communities. He urged Lighthizer to use the NAFTA renegotiation as an opportunity to create a new, fair trade framework for future trade deal negotiations.

In his comments, Johnson stated that NFU has long been concerned with the nation’s massive and persistent trade deficit that U.S. trade negotiators have failed to address in past negotiations. In 2016, the U.S. accumulated a trade deficit of $502.3 billion, which represented a 3 percent drag on the U.S. gross domestic product (GDP).

“While agriculture typically maintains a trade surplus, which is beneficial, it represents less than 4 percent of the overall trade deficit,” he added. “Unfortunately, in recent years, even the agricultural trade surplus has declined. Free trade agreements have not resulted in a stable positive balance of trade for U.S. agriculture.”

Johnson noted that free trade agreements – which typically operate under the framework that NAFTA initiated – have benefited multinational corporations, often at the expense of farming and rural communities.

For example, NAFTA was the first trade agreement to include the Investor-State Dispute Settlement (ISDS) provisions that give investors special privileges in international trade. “These protections allow for and encourage the offshoring of domestic jobs and threaten the sovereignty and democratic policies of the U.S. and our trading partners,” contended Johnson.

Johnson maintained that free trade agreements have stripped the U.S. of its sovereignty. He urged the Trump Administration to rework NAFTA to allow for domestic sovereignty over laws regarding food and agriculture.

“The Administration should include restoring Country-of-Origin Labeling (COOL) as one of the chief negotiation objectives in agriculture,” said Johnson. “COOL is one strong example of a popular domestic law that has been usurped by free trade deals that undermine our nation’s ability to pass and maintain laws for the benefit of America.”

“Agriculture has been central to the advocacy efforts around free trade agreements for decades. NFU stands ready to assist USTR and the Administration in creating a new fair trade paradigm,” Johnson concluded.

Annual Policy Priorities For the eighty-eighth year, the Ohio Farmers Union has established the organization's public policy priorities at the … END_OF_DOCUMENT_TOKEN_TO_BE_REPLACED

It's looking great for the first full, uninterrupted Ohio fair season since the beginning of the pandemic. Of special note, the Ohio State Fair will … END_OF_DOCUMENT_TOKEN_TO_BE_REPLACED

In a pleasant surprise for rural Ohio, the biennial budget was agreed to Monday with Gov. Mike DeWine's full $250 million funding request for rural … END_OF_DOCUMENT_TOKEN_TO_BE_REPLACED