from the National Farmers Union: 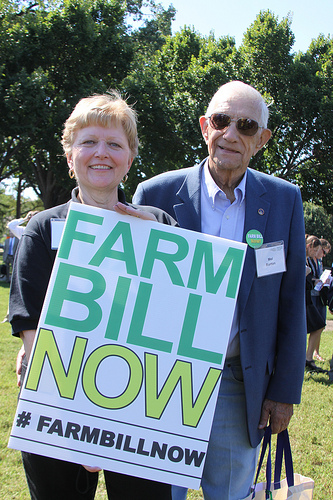 WASHINGTON – National Farmers Union President Roger Johnson issued the following statement amid reports that Congress may consider an extension of the 2008 Farm Bill. The 2008 Farm Bill expired on Sept. 30:

“With the current legislative session quickly coming to a close, it is imperative now, more than ever, that Congress act during their lame duck session before substantial harm is done to our farmers, ranchers and all Americans, who depend on a stable farm economy, a healthy environment and access to affordable nutrition programs.

“Merely extending the current law may well be more difficult than passing a new five-year bill. A short-term extension would reveal a litany of problems that will not be easily fixed when a new farm bill eventually is signed into law.

“The drought this past summer left producers unprotected because livestock and crop disaster programs had expired. Extending current law could leave farmers and ranchers in drought-stricken regions without the tools needed to recover.

“Direct payments may well be eliminated in a farm bill extension, in order to provide for deficit reduction which would remove $50 million from the next farm bill in addition to other reductions in baseline funding. This will likely put substantial pressure to cut crop insurance, which is a critical part of the safety net.

“Thirty-seven conservation, energy, research and specialty crop programs do not have baseline funding beyond the duration of the last Farm Bill and have now expired. Among these expired programs are a number of important conservation programs, the entire energy title and other programs of importance to beginning farmers and local and regional food systems. It is almost assured that all of these programs will have reduced or eliminated funding under an extension that would be nearly impossible to recover in a subsequent farm bill.

“Simply put, a comprehensive, five-year bill just makes more sense. A temporary extension would be an inadequate solution that would leave our farmers and ranchers and the nation they feed crippled by uncertainty.”

In a pleasant surprise for rural Ohio, the biennial budget was agreed to Monday with Gov. Mike DeWine's full $250 million funding request for rural … END_OF_DOCUMENT_TOKEN_TO_BE_REPLACED