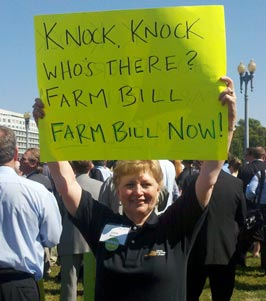 Linda Borton and other Ohio Farmers Union leaders participated in the Farm Bill NOW Rally on Capitol Hill in Washington, D.C. in September. OFU joined the National Farmers Union and Farm Bureau Federation and many other ag groups to demonstrate the need for swift passage of the 2012 Farm Bill.

“It is disappointing that House leadership made the decision to not act on a farm bill before yesterday’s expiration of the 2008 Farm Bill, despite indications that there were enough votes to pass the bill. We are hopeful that, with the pressures of the November elections behind them, Congress will commit to making a concerted, proactive effort to pass a comprehensive, five-year farm bill in the lame duck session. We look forward to working with members of Congress and all interested parties during the lame duck session to ensure that a farm bill can be completed by year’s end.

“The lame duck session will feature a plethora of important issues that have also gone unresolved by this Congress, including the sequestration process, numerous tax and spending issues, and U.S. Postal Service reform. Therefore, it is absolutely critical that House Speaker John Boehner brings the farm bill to the floor early in the session to ensure it can be conferenced and finalized before Congress returns to their districts yet another recess in December.

“The longer Congress drags its feet, the harder their inaction will be felt by farmers, ranchers and, ultimately, all Americans.”

Annual Policy Priorities For the eighty-eighth year, the Ohio Farmers Union has established the organization's public policy priorities at the … END_OF_DOCUMENT_TOKEN_TO_BE_REPLACED

It's looking great for the first full, uninterrupted Ohio fair season since the beginning of the pandemic. Of special note, the Ohio State Fair will … END_OF_DOCUMENT_TOKEN_TO_BE_REPLACED

In a pleasant surprise for rural Ohio, the biennial budget was agreed to Monday with Gov. Mike DeWine's full $250 million funding request for rural … END_OF_DOCUMENT_TOKEN_TO_BE_REPLACED