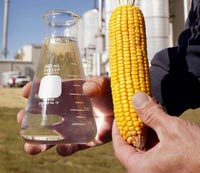 WASHINGTON (Oct. 5, 2011) – National Farmers Union (NFU) and a coalition of organizations joined today in a letter opposing legislation from Reps. Bob Goodlatte, R-Va., and Jim Costa, D-Calif., that would arbitrarily reduce or eliminate the volumes of renewable fuel use required by the Renewable Fuels Standard (RFS) based upon corn stocks-to-use ratios.

“American farmers have met, can and will continue to meet our domestic and international commitments for food and feed while still making a significant and growing contribution to lessening our dependence on imported oil,” the coalition wrote.

According to researchers at Iowa State University and the University of Wisconsin, ethanol has proven beneficial to the economy, reducing the price consumers pay at the pump by 89 cents per gallon in 2010 alone.

“This legislation represents backward-looking thinking regarding our economic and energy security,” said NFU President Roger Johnson. “We need policy that continues to transition our economy away from imported fossil fuels and towards homegrown biofuels.”

NFU policy supports an expanded RFS and ambitious mandates for production of biofuels.

Annual Policy Priorities For the eighty-eighth year, the Ohio Farmers Union has established the organization's public policy priorities at the … END_OF_DOCUMENT_TOKEN_TO_BE_REPLACED

It's looking great for the first full, uninterrupted Ohio fair season since the beginning of the pandemic. Of special note, the Ohio State Fair will … END_OF_DOCUMENT_TOKEN_TO_BE_REPLACED

In a pleasant surprise for rural Ohio, the biennial budget was agreed to Monday with Gov. Mike DeWine's full $250 million funding request for rural … END_OF_DOCUMENT_TOKEN_TO_BE_REPLACED