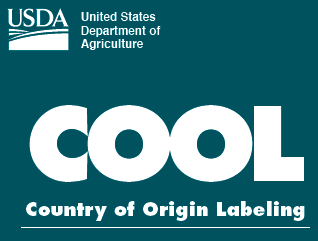 from The National Farmers Union

WASHINGTON – The World Trade Organization has given the United States until May 23, 2013, to bring its Country-of-Origin Labeling (COOL) rules into compliance with a WTO ruling.

“NFU will continue to work with United States Department of Agriculture (USDA) and the Office of the United States Trade Representative to ensure that new rules for COOL fit with the WTO’s ruling and with consumer demand for more information about the origins of their food,” said National Farmers Union (NFU) President Roger Johnson.

The labeling law was passed as a part of the Farm Security and Rural Investment Act of 2002 and amended in 2008, requiring retailers to notify their customers of the source of certain foods. After COOL was implemented, Canada and Mexico filed a complaint against the United States’ law. A WTO ruling in June agreed in part with the complaint, stating that the way by which the law was implemented discriminated against imported meat products, but did not find fault with the law itself.

“NFU has a proud record of supporting COOL. We were instrumental in getting the COOL laws passed in 2002 and again in 2008 and will continue to support its implementation in a way that meets the requirements of the WTO.”

According to the USDA Economic Research Service, food imports have consistently increased since 1990.

“Consumers want and have the right to know from where their meat comes from. We will continue to vigorously defend the COOL law, which was upheld in June. Only the rules that were issued to implement COOL law are in question and can be adjusted.”

Annual Policy Priorities For the eighty-eighth year, the Ohio Farmers Union has established the organization's public policy priorities at the … END_OF_DOCUMENT_TOKEN_TO_BE_REPLACED

It's looking great for the first full, uninterrupted Ohio fair season since the beginning of the pandemic. Of special note, the Ohio State Fair will … END_OF_DOCUMENT_TOKEN_TO_BE_REPLACED

In a pleasant surprise for rural Ohio, the biennial budget was agreed to Monday with Gov. Mike DeWine's full $250 million funding request for rural … END_OF_DOCUMENT_TOKEN_TO_BE_REPLACED