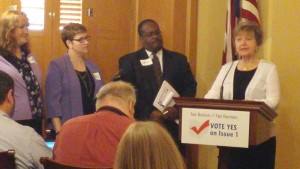 “It all comes down to monopolistic behavior and an attempt by big money interests to use the Ohio Constitution as their personal business plan,” said OFU External Relations Director Ron Sylvester.

Sylvester said Board deliberations on State Issue 3 “was a short discussion.”

“After all, you’re talking about a group of independent family farmers who belong to an organization that was founded over 100 years ago to fight monopolistic practices in a Texas cotton market,” Sylvester said.

Sylvester said “markets rigged for already wealthy interests” and the fact that industrial hemp isn’t a consideration in the proposed amendment drove the OFU discussion.

“Frankly, we didn’t even have to engage members on issues of morality,” Sylvester said.

He said OFU believes that the time has come for de-criminalization of medical marijuana and industrial hemp. Legalization of recreational marijuana and related issues should be dealt with “via a thorough, fair and transparent process conducted by the Ohio General Assembly.”

Annual Policy Priorities For the eighty-eighth year, the Ohio Farmers Union has established the organization's public policy priorities at the … END_OF_DOCUMENT_TOKEN_TO_BE_REPLACED

It's looking great for the first full, uninterrupted Ohio fair season since the beginning of the pandemic. Of special note, the Ohio State Fair will … END_OF_DOCUMENT_TOKEN_TO_BE_REPLACED

In a pleasant surprise for rural Ohio, the biennial budget was agreed to Monday with Gov. Mike DeWine's full $250 million funding request for rural … END_OF_DOCUMENT_TOKEN_TO_BE_REPLACED