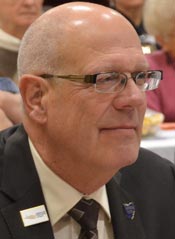 Ohio Farmers Union president Roger Wise of Fremont and the board of directors of the National Farmers Union unanimously passed a resolution over the weekend indicating the obligation of Congress to pass a five-year farm bill, continue support for Country-of-Origin Labeling (COOL) and the Renewable Fuel Standard (RFS).

Wise and the other NFU state presidents are in Washington, D.C. with rank and file Farmers Union members to lobby members of Congress with the leadership and staff of NFU early this week.

“As a member of the NFU Board of Directors, I voted to support the resolution to show the Ohio Farmers Union’s unflagging support for a new Farm Bill and for Congress to continue support for COOL and the Renewable Fuel Standard,” Wise said.

“The fact that the Farm Bill has become an object of partisanship and has been mired in the House for two years – held hostage by a group of extremists – is a prime example of our broken political process in Washington,” Wise added.

“I’m here again with my colleagues from around Ohio and the country to simply ask for reason and a willingness to work together for compromise that allows agriculture in America to move forward with a bill like that passed by the Senate which contains deficit reduction, contains reforms and has farmers with more skin in the game as it pertains to the safety net,” Wise added.

Roger Johnson, NFU president said, “Along with providing a comprehensive, five-year farm bill, Congress and the administration must protect the existing COOL law for meat, seafood, poultry and other agricultural products. In an increasingly economically-interconnected world, COOL provides important, common-sense information to American consumers about their food.”

“Congress must also pursue policies that support our nation’s energy security,” the resolution stated. “The RFS is a crucial tool to wean our nation off foreign oil, promote rural economic development, and reduce greenhouse gases in the transportation sector,” Johnson added.

The meeting of the Board this past weekend preceded NFU’s Fall Legislative Fly-In that will bring nearly 300 Farmers Union members to Washington for meetings with legislators and other events Sept. 9 to 11. For more information about Fly-In events, visit www.NFU.org.

Annual Policy Priorities For the eighty-eighth year, the Ohio Farmers Union has established the organization's public policy priorities at the … END_OF_DOCUMENT_TOKEN_TO_BE_REPLACED

It's looking great for the first full, uninterrupted Ohio fair season since the beginning of the pandemic. Of special note, the Ohio State Fair will … END_OF_DOCUMENT_TOKEN_TO_BE_REPLACED

In a pleasant surprise for rural Ohio, the biennial budget was agreed to Monday with Gov. Mike DeWine's full $250 million funding request for rural … END_OF_DOCUMENT_TOKEN_TO_BE_REPLACED