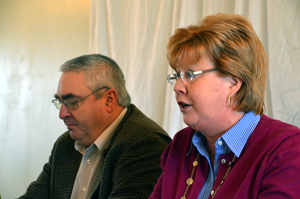 She couldn’t guarantee that the additional dollar being sought for the checkoff could be use for Ohio-raised beef marketing to bolster local and regional sales in retail outlets, but agreed it was an idea that the Beef Council should consider.

Other OFU county presidents told Harsh that for organic producers and others exempt from marketing checkoffs, the fact that the Ohio Beef Checkoff is collected despite their exemption and farmers are forced to engage in a cumbersome rebate process is a problem.

In discussion after Harsh’s presentation, the OFU Board reaffirmed the standing policy that the organization will not support checkoffs which are not voluntary at the point of delivery. The resolution was offered by Executive Committeeman Joe Logan.

In a letter to ODA, OFU President Roger Wise said that OFU opposes the increase. In addition to making some of the points expressed in the meeting with Harsh, Wise pointed out that U.S. beef consumption – and meat consumption in general – have been on the decrease for several years and neither the national nor state checkoffs have done anything to change the direction of that trend.

Annual Policy Priorities For the eighty-eighth year, the Ohio Farmers Union has established the organization's public policy priorities at the … END_OF_DOCUMENT_TOKEN_TO_BE_REPLACED

It's looking great for the first full, uninterrupted Ohio fair season since the beginning of the pandemic. Of special note, the Ohio State Fair will … END_OF_DOCUMENT_TOKEN_TO_BE_REPLACED

In a pleasant surprise for rural Ohio, the biennial budget was agreed to Monday with Gov. Mike DeWine's full $250 million funding request for rural … END_OF_DOCUMENT_TOKEN_TO_BE_REPLACED