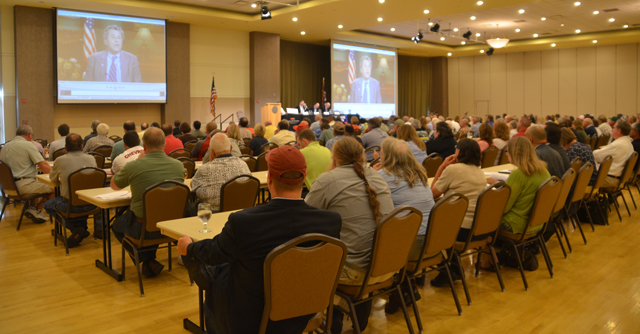 More than 250 farmers and others interested in Ohio agriculture attended a recent 2014 Farm Bill Forum sponsored by the Ohio Farmers Union.

Passed earlier this year, the latest five-year Farm Bill is not yet fully implemented, but farmers who run the gamut from direct marketing of specialty crops or livestock to commodity producers of corn and soybeans will notice changes in the federal safety net for family farms.

The major takeaway from this year’s Farm Bill is the move away from direct payments and toward federally-backed crop insurance. In this new world even those farmers who are not producing major commodities like corn and soybeans in Ohio may benefit from new “whole farm” coverage according to Joe Schulz, chief economist for the U.S. Senate Committee on Agricutlture.

Undoubtedly, though, in Ohio there are thousands of farmers growing commodities who are wondering what the new ag safety net has in store for them. 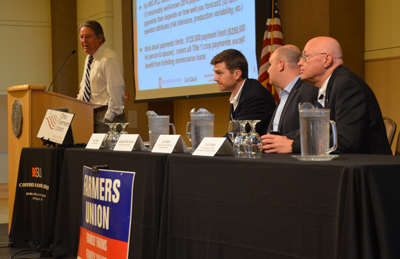 Under the new law, farmers will take one of two paths regarding major commodities. One option is Price Loss Coverage, or PLC, a price-based assistance program. The other is Agricultural Risk Coverage, or ARC, a farm revenue-based program. The choice farmers make around the country will stick with them for the next five years.

“I do own farmland – I’ll be making many of these decisions that you are going to make,” said Carl Zulauf, a professor at Ohio State University’s Dept. of Agricultural, Environmental and Development Economics.

For agricultural commodity producers, Zulauf said there are three major decisions to make regarding participation in USDA-backed safety net programs in the 2014 Farm Bill. They are base yields, the option to reallocate base acres and a choice between a program that serves multiple year losses or shallow losses.

Zulauf went through several scenarios based on how farmers may make those decisions. Ultimately, decisions made regarding the 2014 Farm Bill may come down to whether a producer is attempting to cover losses or maximize federal crop insurance payments.

While the decision-making process is more complex this year – and producers’ decisions will last for the five-year length of the current Farm Bill – there is time and help available to farmers according to Terry Nicholson of USDA Farm Service Agency.

“Until the rules are written and published, there’s not much that Farm Service Agency can do with this program,” Nicholson said.

However, he said that officials understand that the changes are complex and there will be time available – probably over this winter – for farmers to work with their local FSA offices to sign up for programs. Those sign-ups will be retroactive for the 2014 crop year.

Terry Cosby, USDA State Conservationist in Ohio reminded farmers that all producers wishing to participate in USDA crop insurance programs will need to have on file with their local FSA office a Highly Erodible Land Conservation and Wetland Conservation Certification, also known as an AD-1026 form. Those forms and assistance in completing them may be obtained from local FSA representatives.

Annual Policy Priorities For the eighty-eighth year, the Ohio Farmers Union has established the organization's public policy priorities at the … END_OF_DOCUMENT_TOKEN_TO_BE_REPLACED

It's looking great for the first full, uninterrupted Ohio fair season since the beginning of the pandemic. Of special note, the Ohio State Fair will … END_OF_DOCUMENT_TOKEN_TO_BE_REPLACED

In a pleasant surprise for rural Ohio, the biennial budget was agreed to Monday with Gov. Mike DeWine's full $250 million funding request for rural … END_OF_DOCUMENT_TOKEN_TO_BE_REPLACED