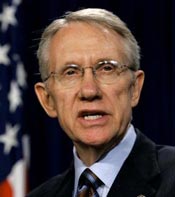 The sequester is a package of drastic, across the board cuts to domestic programs including defense that was passed during the debt ceiling fiasco of 2011. Sequestration was designed to play out over ten years with the first cuts coming on Jan. 1. That deadline was pushed back by the early January fiscal cliff deal. Congress has not been able since then to address these automatic cuts. With the March deadline looming, Senate Democrats are proposing to nullify this year’s cuts and put in their place a balanced package of targeted cuts and tax increases on wealthy Americans.

Here’s where it gets interesting for agriculture and potentially for the future of the Farm Bill. According to Politico, $27.5 billion of Reid’s plan would come by cutting the direct payments under the USDA:

About $31 billion would be saved by cutting direct cash payments to producers — a system that is widely criticized at a time of high farm income. And to win support from Senate Agriculture Committee Chairwoman Debbie Stabenow (D-Mich.), the bill reallocates about $3.5 billion of these savings to extend farm programs left hanging by the White House and Senate Republicans in the New Year’s tax deal.

Although the $3.5 billion in funding for conservation and other programs not currently funded due to the lack of a Farm Bill would be nice, there are some questions that come to mind by dealing with the direct payments issue outside of a comprehensive, federal Farm Bill.

First, it should be noted that most actual farmers and ranchers have wanted to see the direct payments system go away or wholesale reformed for a long time. There have been Hollywood celebrities, real estate speculators and other non-farmers who have collected payments because they own land – that’s not why the payments were originally created. These payments are a part of a larger safety net for agriculture ensuring that farmers produce during the lean times as well as times like those we’re living through now. (Unless you’ve been affected by drought or other natural disaster.) In the bipartisan, Senate-passed bill last year, direct payments were replaced with a revamped crop insurance program. Does the current Democratic proposal contain the crop insurance provisions? We’ll be watching.

Second is the Farm Bill itself. Farm bills have never been easy for Congress – regional conflicts erupt over this program or that program – but they’ve always gotten done. One reason is the nutrition title which includes the Supplemental Nutrition Assistance Program (food stamps) and school nutrition provisions. The nutrition title doesn’t just bring rural and urban/suburban America together because of SNAP – although that’s true and there are no doubt many an urban member of Congress who votes for farm bills just because of SNAP. The nutrition title also creates an important link between producers and eaters. They call it a system of food for a reason. The nutrition title, in an otherwise producer-oriented bill sends the message that all Americans should care about the parts of their food system, even the ones that they don’t see.

So the second question is, if you split out the most controversial part of the producer-side of the Farm Bill and essentially solve it in many Americans’ eyes – what’s to become of the rest of the bill? The political hot potato last year was SNAP. The Tea Party Republicans in the House, backed by House Speaker John Boehner, (R-OH), prevented the bill from getting to the floor for a vote. They want SNAP cut drastically. SNAP was essentially preserved in that bipartisan Senate bill due to the end of direct payments and other measures. If we “waste” the opportunity by doing away with direct payments outside of the confines of a Farm Bill, are we taking an important progressive bargaining chip off the table to strike another compromise on agriculture’s flagship legislation later this year?

Annual Policy Priorities For the eighty-eighth year, the Ohio Farmers Union has established the organization's public policy priorities at the … END_OF_DOCUMENT_TOKEN_TO_BE_REPLACED

It's looking great for the first full, uninterrupted Ohio fair season since the beginning of the pandemic. Of special note, the Ohio State Fair will … END_OF_DOCUMENT_TOKEN_TO_BE_REPLACED

In a pleasant surprise for rural Ohio, the biennial budget was agreed to Monday with Gov. Mike DeWine's full $250 million funding request for rural … END_OF_DOCUMENT_TOKEN_TO_BE_REPLACED