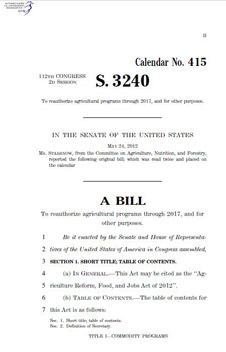 In all, the 2012 Farm Bill would cost the federal government around $969 billion over the next ten years. The Congressional Budget Office analysis of the bill says it will save around $23.6 billion relative to current programs and spending.

NFU has been promoting the concept of the Market Driven Inventory System, or MDIS, as the basis for commodity support programs in the Farm Bill. Essentially, the issue seems to be dead on arrival for Congress, but not necessarily on its merits as potentially good public policy.

In a conference call with staff of Sen. Sherrod Brown, D-Ohio, in April, the subject of MDIS was brought up. When asked what the likelihood was of MDIS getting traction during this 2012 debate, the answer was not likely – due to the fact that many senators were still not familiar enough with the proposal.

What Can You Do?

As the Senate debates the bill over the next two to three weeks, there will be amendments offered to the legislation and NFU staff is monitoring the situation closely. OFU has set up a 2012 Farm Bill page that will contain any legislative alerts issued by NFU with the relevant background on proposed policy and any appeals from NFU to contact legislators.

Your telephone calls, emails and letters make a difference. When NFU issues an alert, we’ll do our best to distill the relevant information and tell you what the proposed policy could mean for family farms and consumers. Emails and phone calls, expressing your opinion in your own words, can be powerful. Over the coming weeks as the bill moves through the Senate and on to the House, we’ll do our best to provide you the information you need to tell your senators and members of Congress where you stand on Farm Bill issues.

Annual Policy Priorities For the eighty-eighth year, the Ohio Farmers Union has established the organization's public policy priorities at the … END_OF_DOCUMENT_TOKEN_TO_BE_REPLACED

It's looking great for the first full, uninterrupted Ohio fair season since the beginning of the pandemic. Of special note, the Ohio State Fair will … END_OF_DOCUMENT_TOKEN_TO_BE_REPLACED

In a pleasant surprise for rural Ohio, the biennial budget was agreed to Monday with Gov. Mike DeWine's full $250 million funding request for rural … END_OF_DOCUMENT_TOKEN_TO_BE_REPLACED