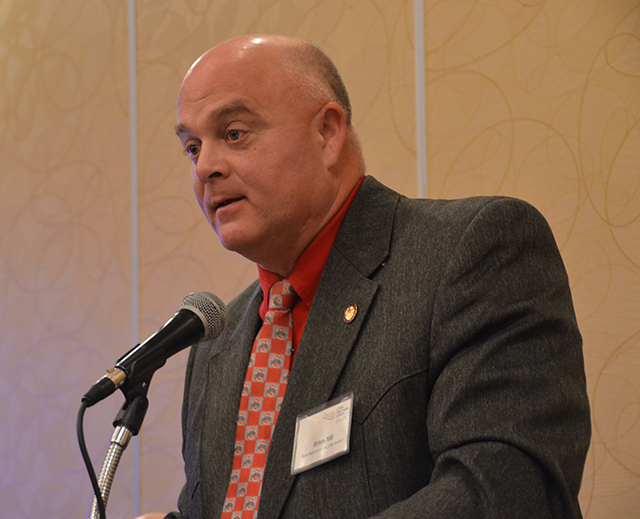 Each year OFU makes the awards honoring state or federal legislators who have championed independent family agriculture in their legislative career.

Hill is chairman of the Ohio House Agriculture committee, a working farmer, former Muskingum County Commissioner and is serving in his second term in the Ohio House.

Kaptur has served in Congress since 1982 and is a perennial winner of the National Farmers Union Golden Triangle Award. The Golden Triangle is awarded based on a Congress member’s advocacy for family farm issues and alignment with NFU priorities.

“Marcy Kaptur has been tireless in her advocacy for common sense consumer labeling – particularly mandatory country of origin labels for beef, pork and poultry,” said OFU President Joe Logan. “Marcy has also been strongly in favor of fair trade deals and stood with the Farmers Union against currency manipulation and so-called fast-track trade authority.”

Kaptur is working against the Trans-Pacific Partnership pending in Congress and being considered under “fast-track.”

“Brian Hill has been especially good for Ohio’s family farmers in fixing the problems with CAUV,” Logan said. “Even before Rep. Hill was chairman he stood with OFU members in seeking fair and measured reforms in farmland real estate taxes.”

Logan said he credits Hill for the currently pending H.B. 398 which would make improvements to the Current Agricultural Use Valuation formula and take some of the wild fluctuations out of the tax rates farmers are paying on their farmland in production.

Logan also said that as chairman of the House Ag Committee Hill has maintained an open-door policy for all sides on issues affecting Ohio agriculture.

“It should also be noted that Rep. Hill is one of the very few members of the legislature who is a working farmer. He gets us, he understands our issues,” Logan said.

In a pleasant surprise for rural Ohio, the biennial budget was agreed to Monday with Gov. Mike DeWine's full $250 million funding request for rural … END_OF_DOCUMENT_TOKEN_TO_BE_REPLACED