Americans Want to Know Where Their Food Comes From

COLUMBUS – Ohio’s second largest general farm organization leveled a broadside at members of Congress who voted this past week to repeal Country of Origin Labeling (COOL) requirements for beef, pork and poultry in the United States.

“In an era where food travels around the world indiscriminately, is there a mother in this country, when asked, who would say they don’t care to know where their food comes from?” asked Joe Logan, president of the Ohio Farmers Union.

“Does the chicken they’re putting on the grill tonight come from U.S. producers – with all of their health and safety regs – or does it come from China where health, safety and environmental regulations are an after-thought?”

Logan said OFU and the National Farmers Union have backed COOL since before it was enacted in the 2002 Farm Bill. He said that globalization and the opening of markets made it a necessity for U.S. consumers to know where their food comes from because many other countries don’t have the food safety regulations protecting U.S. consumers.

Late Thursday night, Congressional supporters of these huge, multi-national corporations used a recent World Trade Organization ruling as an excuse to push a repeal of COOL through the GOP-controlled House of Representatives.

“The WTO process is not over regarding COOL,” said Logan. “The U.S. has ample time and the administration has signaled it would continue to work with Canada and Mexico on fair and honest labeling requirements in this country.”

Logan hopes that the U.S. Senate ignores the House bill.

Logan said that the vote to repeal COOL is important enough for every Ohioan to know where their member of Congress stands when it comes to knowing where their food comes from.

Unless your member of Congress was Joyce Beatty, Marcy Kaptur or Tim Ryan, if you live in Ohio your member voted to take away your right to know where your food comes from.

“In a global economy, information about the foods we eat is essential,” Logan said. “It’s unfathomable how a representative of the people could vote against that.”

Here are a couple of noteworthy links on the background of this issue:

You’ll find in the poll that Americans, when asked, overwhelmingly favor knowing where their meat comes from. You’ll see in the Prof. Robert Taylor study that Canada cannot demonstrate material damage to their own markets as a result of COOL. 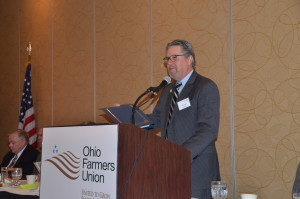 Sometimes it seems like a colossal waste of time and energy but organizations like ours are compelled to rise and speak out when destructive things are happening. Such was the case last week as an extraordinary series of events took place in Washington D.C.

On May 18, a dispute resolution panel from the World Trade Organization (WTO) announced its decision that an existing U.S. law requiring food companies to apply Country Of Origin Labeling (COOL) to many meat products presents a hardship to other nations who wish to sell their products to American customers. The dispute was initiated by Canada and Mexico, who together export about 7% of the beef and 5% of the pork consumed by Americans. Oddly, the dispute panel was chaired by a representative of Mexico.

As a result of their decision, Canada and Mexico will be given the chance to prove/document the economic harm they have suffered. Pending sufficient proof, they will be entitled to impose an equal value of penalties onto the offending country (the U.S.) in the form of tariffs of any American products of their choosing.

The WTO settles many such disputes each year and the process is often a multi-year affair, which includes numerous delays and much negotiation among the parties before a final resolution. This case, however, is taking a radically different course. The nations claiming to be harmed (Mexico and Canada) are supported by some organizations who are authorized by the U.S. government. As ridiculous as it might seem, the National Cattlemen’s Beef Association (NCBA) and the National Pork Producers Council (NPPC) – two organizations authorized by the U.S. Congress — are siding with our trading partners and against the United States in this case. 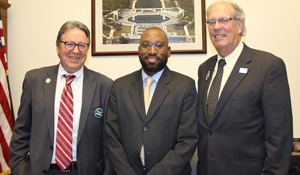 The rationale for this strange occurrence is simple but frightening in its implications. Our livestock producing, processing and marketing systems have been changing in profound ways. Our pork, poultry and beef industries have become highly integrated and globalized. They are now dominated by a handful of very large, global corporations. Gone are the days when independent farmers raised hogs and chickens and offered them for sale in local or regional markets. Although many independent cattlemen still raise calves, the feedlots where most cattle reach market weight are dominated by large corporate beef processors.

In such a global, integrated system, both processors and importers have taken seats on the boards of the organizations (like NCBA and NPPC) that were once held by independent farmers and ranchers. Now, those organizations serve the interests of their global corporate giants who own and control the lion’s share of the livestock, processing plants and distribution chains. If today’s globalized, integrated system had been this firmly in place in 2002, we would never have been able to get COOL enacted, despite that it is very strongly supported by both consumers and independent farmers.

The National Farmers Union fought vigorously for the better part of two decades to get COOL passed by Congress and enacted by USDA. We have been extremely proud to have championed a policy that was so robustly supported by consumers and that gave those remaining independent farmers and ranchers a chance to redeem the benefits of their extraordinary efforts to produce safe, high quality food products for American Consumers.

The changing structure of the livestock and food industry, along with the changing character of our more partisan congress, have created a seismic shift in the political landscape for issues like COOL. Members of Congress can now ignore the enormous popularity of issues like COOL (90% approval) and instead bow to the interests of corporate lobbyists who can provide resources needed to overwhelm any political foe.

In this political environment, it is not surprising that the opponents of COOL – the global food processing companies have mustered the resources to influence key members of congress to take extraordinary actions like the one that occurred on May 19: The House Ag Committee Chairman introduced a bill to repeal the COOL. Not only did Chairman Conaway introduce the bill, but he conducted an expedited “mark up” and committee vote to approve his bill the following day.

Despite our feverish efforts to inform many thoughtful members, the bill easily passed out of committee and will be scheduled for a vote on the floor of the House in June. After several days of work talking to hundreds of members of the House and Senate, we believe we have headed the stampede. We feel confident that the WTO process will have a chance to play out before Congress takes repeals the law.
We are also confident that Canada, Mexico and the global meat processors will be hard pressed to demonstrate any legitimate harm from our COOL law. If so, our hard-fought and highly popular policy may survive and serve the interests of consumers and for years to come.

If you haven’t already, please call your member of Congress and ask your friends and family – farmer and consumer alike – to do the same. Tell your representative that Americans deserve to know where their food comes and that America’s – and Ohio’s – family farmers deserve their right to proudly proclaim their bounty is a product of the U.S.A.

Contrary to arguments made by America’s trade competitors to the World Trade Organization (WTO), an economic downturn that sapped consumer demand — not Country-of-Origin Labeling (COOL) — caused decreased demand for cattle imports into to the U.S., according to a new study released last week.

“COOL did not cause the declines in livestock exports to the United States, which largely coincided with a substantial global economic downturn that sapped demand for more expensive meat products,” notes the study, authored by C. Robert Taylor, Ph.D., an Auburn University Alfa Eminent Scholar and Professor.

Canada and Mexico challenged COOL provisions related to muscle cuts of beef at the WTO in 2008, alleging the widely popular labeling law was a trade barrier that compromised their export opportunities and market access to the United States for live cattle and hogs. The cost of implementing COOL, they argued, discouraged U.S. meatpacking and processing companies from purchasing livestock of non-U.S. origin and, as a result, reduced the prices of these livestock exports.

But after close examination of more robust data sources to assess the impact of COOL on market access, the study found:

END_OF_DOCUMENT_TOKEN_TO_BE_REPLACED

Annual Policy Priorities For the eighty-eighth year, the Ohio Farmers Union has established the organization's public policy priorities at the … END_OF_DOCUMENT_TOKEN_TO_BE_REPLACED

It's looking great for the first full, uninterrupted Ohio fair season since the beginning of the pandemic. Of special note, the Ohio State Fair will … END_OF_DOCUMENT_TOKEN_TO_BE_REPLACED

In a pleasant surprise for rural Ohio, the biennial budget was agreed to Monday with Gov. Mike DeWine's full $250 million funding request for rural … END_OF_DOCUMENT_TOKEN_TO_BE_REPLACED