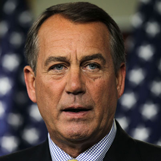 The National Farmers Union and 531 other agriculture, rural development, conservation, financial services, energy and forestry groups asked U.S. House Speaker John Boehner (R-Ohio) over the Fourth of July week to bring the Farm Bill to the floor for another try and to keep the nutrition title a part of the bill.

“Farm bills represent a delicate balance between America’s farm, nutrition, conservation, and other priorities, and accordingly require strong bipartisan support. It is vital for the House to try once again to bring together a broad coalition of lawmakers from both sides of the aisle to provide certainty for farmers, rural America, the environment and our economy in general and pass a five -year farm bill uponreturning in July. We believe that splitting the nutrition title from the rest of the bill could result in neither farm nor nutrition programs passing, and urge you to move a unified farm bill forward,” read a letter to the speaker signed by the 532 organizations.

The Ohio Farmers Union was a signatory, as was NFU and the Ohio and American Farm Burea Federations.

You may read the entire letter and view the list of signers here. 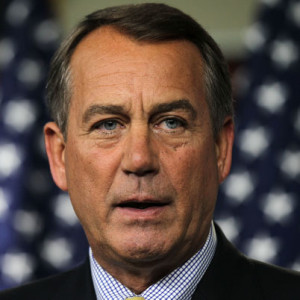 “It is promising to hear that House leadership is embracing the 2013 Farm Bill and its importance to all Americans. I also applaud Reps. Lucas and Peterson for their bipartisan leadership in getting the bill to the floor. In order to provide certainty for U.S. family farmers and ranchers, it is critical that the farm bill continues making progress toward conference and final passage prior to the Sept. 30, deadline.

“NFU also supports the bill’s elimination of direct payments. American farmers need a safety net in times of natural disaster and long-term price collapse, not when conditions are more favorable. We will continue to work with members of Congress through the passage in the House and conference process to ensure that we end up with a comprehensive, five-year bill that is the best that it can be.”

“NFU is deeply disappointed with Speaker Boehner’s comments this morning. It is crystal clear that Republican leadership is what is holding the farm bill hostage. While the announcement comes as no surprise, punting the farm bill into the lame duck session is a transparent political maneuver that leaves rural America holding its collective breath about its livelihood and future.

“The lame duck session will be dealing with many very significant tax and funding issues which have also been left undone by this Congress. We worry about whether the farm bill might become a pawn in that process.

“We are confident that there are enough votes to pass the farm bill now. We strongly urge the Speaker to reconsider the recess and take up the bill and deal with it now. Congress should not leave town early while leaving U.S. farmers and ranchers facing enormous uncertainty.

“On the heels of one of the most devastating disasters our country has seen in many years, the agricultural community needs certainty here and now, not in six weeks time. Allowing Congress to pack up and leave town once again without taking up a farm bill is an irresponsible travesty.”

There’s a job for you to do as well. Contact your member of Congress and tell him or her that it’s never been more important for U.S. farm policy to move forward in a bipartisan manner. U.S. farmers and ranchers are battling the worst drought since WWII, the national economic recovery is weak and farmers need certainty as much as multi-national corporations and the big banks on Wall Street. Don’t let them forget the farmers. Below you will find some information from the National Farmers Union. Read it and think about how the lack of a Farm Bill passed by September 30 would affect your own family farm. Tell your member of Congress about that and ask them to support efforts to move the bipartisan bill passed by the House Ag Committee to the floor. 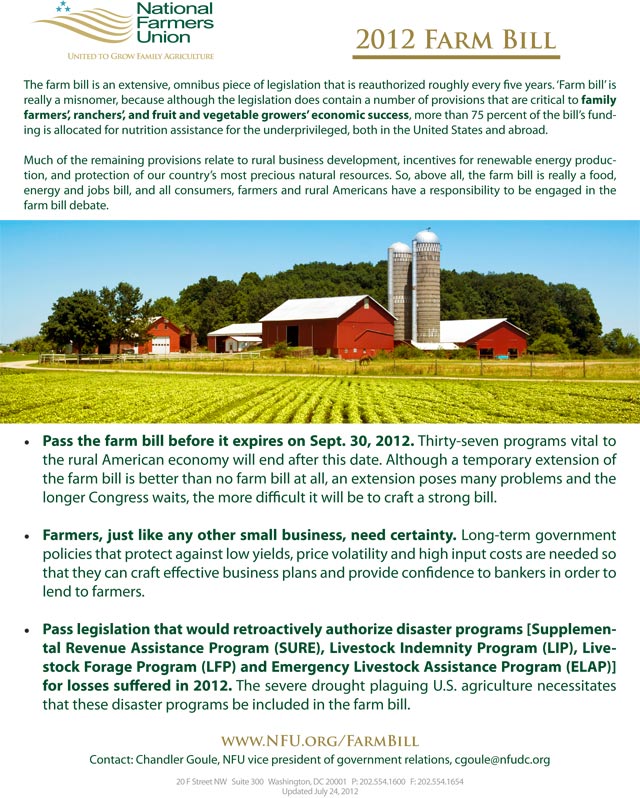 Due to COVID-19 risk and restrictions, the Ohio Farmers Union's 87th Annual Convention will be held as a teleconference and full Board of Directors … END_OF_DOCUMENT_TOKEN_TO_BE_REPLACED

In a sprawling, diverse U.S. family farm community, questions are being asked about President-elect Joe Biden’s choice of Tom Vilsack to lead the USDA … END_OF_DOCUMENT_TOKEN_TO_BE_REPLACED

Sponsored in part by the Ohio Farmers Union, this event is FREE and open to the public. People of African descent have a long … END_OF_DOCUMENT_TOKEN_TO_BE_REPLACED