Range Resources Exec Says Tactics Have Been Used in PA

I’m not one prone to the conspiratorial ramblings of the tin-foil hat wearing crowd. There’s enough evil and injustice in the world of reality to process in any given day to get too carried away with 9/11 Truthers and the like.

Evidence of that is in a story broken yesterday by CNBC which bills itself as the network for people of high net worth – not exactly an anti-establishment organization.

According to CNBC’s story, the network was contacted by Sharon Wilson an environmental activist affiliated with Earthworks‘ Oil & Gas Accountability Project who paid to attend a natural gas industry conference on media and community relations in late October. At the conference, Wilson heard executives from some of the key U.S. companies involved in fracking for natural gas in places like Pennsylvania suggest during presentations that military-style ‘psy ops’ be used to combat environmental and other fracking concerns.

From the CNBC story:

“We have several former psy ops folks that work for us at Range because they’re very comfortable in dealing with localized issues and local governments,” Pitzarella said. “Really all they do is spend most of their time helping folks develop local ordinances and things like that. But very much having that understanding of psy ops in the Army and in the Middle East has applied very helpfully here for us in Pennsylvania.”

At another session, Matt Carmichael, the manager of external affairs for Anadarko Petroleum, spoke on the topic of “Understanding How Unconventional Oil & Gas Operators are Developing a Comprehensive Media Relations Strategy to Engage Stakeholders and Educate the Public.”

He said he had several recommendations for the oil industry media professionals at the event, one of which, he said, involved the military.

“Download the U.S. Army-slash-Marine Corps Counterinsurgency Manual, because we are dealing with an insurgency,” Carmichael said. “There’s a lot of good lessons in there and coming from a military background, I found the insight in that extremely remarkable.”

Range Resources is a publicly traded company with a market cap over $11 billion. Anadarko Petroleum, also a public company, possesses market capitalization of $40 billion. These companies can afford to communicate with rural landowners, farmers and small town America in any ways they please. Using tactics that the U.S. military uses against terrorist and Taliban insurgents in places like Iraq and Afghanistan is the choice they are making in Pennsylvania.

I wonder what their operational plan is for Ohio?

You can read the entire CNBC story and listen to audio from the conference here.

Here are a few headlines from the last several weeks regarding the beginning of the natural gas rush in Ohio:

If you are a farmer or a landowner in eastern Ohio, it’s likely that if you haven’t had a visit – or several – from a gas company, they’re probably just now pulling into the driveway. They will have a deal for you, maybe even a signing bonus. There are two questions to ask yourself. First, if they drill, do you understand all of the impacts to your land and its water supply. Second, will there be better deals down the road?

From the Associated Press story cited above:

The Beinlichs are among thousands of residents living atop the gas-rich Marcellus Shale who signed lowball leases in the years leading up to the boom in Pennsylvania. In those early days a half-decade ago, virtually no layperson had even heard of the rock formation, let alone knew that drillers had found a way to access the huge reservoir of natural gas locked inside it.

An untold number of industry-friendly agreements are now approaching their expiration dates. But landowners who expected to sign new leases — and reap windfalls of thousands of dollars an acre — are facing the reality that energy companies with billion-dollar investments in the Marcellus are not about to let their prime acreage slip away.

As landowners in Ohio and New York prepare for their own round of Marcellus leasing, high-stakes battles are developing in law offices and courtrooms throughout Pennsylvania. Landowners who signed early for pittances are trying to get out of their leases, and gas companies are trying just as hard to keep them shackled to the original terms. In some cases, landowners say they were fraudulently induced into signing by high-pressure sales agents known in the industry as landmen. In others, residents contend that companies failed to abide by the lease or act in good faith.

Perhaps we in Ohio are where the Beinlich family was a few years ago in Pennsylvania. From the Plain Dealer linked above:

Only a handful of shale gas wells — about 14 — have actually been drilled in Ohio, state records show. But a gusher of money has already been pumped into the state in the form of bonuses when landowners sign lease deals. It totals more than $1 billion so far, said David Mustine, head of JobsOhio, Gov. John Kasich’s new privatized department of development.

The billion-dollar gusher is sure to grow.

Those who signed leases 18 months ago received $500 per acre and a guaranteed royalty of 12 1/2 percent of the value of the gas produced from their acreage.

The competitive frenzy has since pushed the bonus offers to about $5,000 per acre and a royalty of 19 1/2 percent.

One would think that the natural gas market must literally be screaming for supply. We’re hearing a a great deal of cheerleading out of the politicians in Columbus about billions of dollars and hundreds of thousands of jobs. I was thinking about the natural gas market this morning because natural gas is dirt cheap – near a historic low in price – and I was starting to feel feverish about the boom in Ohio. Should I invest in something now? Buy low! Sell high!

Then I remembered this from the New York Times just a few weeks ago (also cited above):

NEW TOWN, N.D. — Across western North Dakota, hundreds of fires rise above fields of wheat and sunflowers and bales of hay. At night, they illuminate the prairie skies like giant fireflies.

They are not wildfires caused by lightning strikes or other acts of nature, but the deliberate burning of natural gas by oil companies rushing to extract oil from the Bakken shale field and take advantage of the high price of crude. The gas bubbles up alongside the far more valuable oil, and with less economic incentive to capture it, the drillers treat the gas as waste and simply burn it.

Every day, more than 100 million cubic feet of natural gas is flared this way — enough energy to heat half a million homes for a day.

The flared gas also spews at least two million tons of carbon dioxide into the atmosphere every year, as much as 384,000 cars or a medium-size coal-fired power plant would emit, alarming some environmentalists.

All told, 30 percent of the natural gas produced in North Dakota is burned as waste. No other major domestic oil field currently flares close to that much, though the practice is still common in countries like Russia, Nigeria and Iran.

Something is not computing. There’s a guy at the door and he says we need to get this matter of a lease handled right away. But, the stuff that they’re going to spend millions of dollars per well on to extract from the ground is being burned as waste as a matter of course in North Dakota.

There are many reasons for Ohio to proceed with caution when it comes to the gas boom. I just gave you three more. 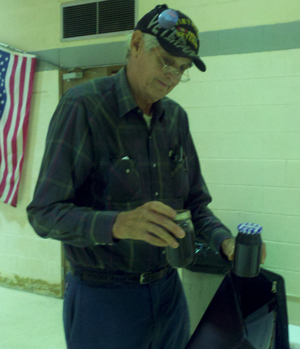 END_OF_DOCUMENT_TOKEN_TO_BE_REPLACED

Annual Policy Priorities For the eighty-eighth year, the Ohio Farmers Union has established the organization's public policy priorities at the … END_OF_DOCUMENT_TOKEN_TO_BE_REPLACED

It's looking great for the first full, uninterrupted Ohio fair season since the beginning of the pandemic. Of special note, the Ohio State Fair will … END_OF_DOCUMENT_TOKEN_TO_BE_REPLACED

In a pleasant surprise for rural Ohio, the biennial budget was agreed to Monday with Gov. Mike DeWine's full $250 million funding request for rural … END_OF_DOCUMENT_TOKEN_TO_BE_REPLACED