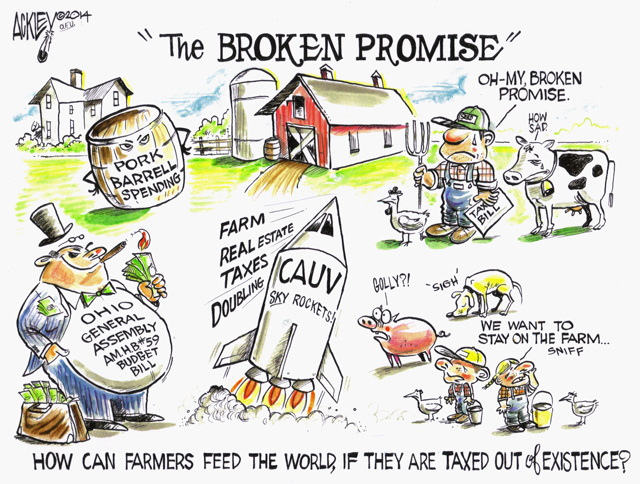 Ted Finnarn, Darke County Farmers Union Secretary-Treasurer, who is also a Greenville attorney, has been working for the past several months to educate farmers and rural landowners about skyrocketing Current Agricultural Use Value assessments for farm land property tax purposes. He’s even enlisted the help of editorial cartoonist Paul Ackley in his endeavor, as seen from the cartoon above.

Check out this link for more background on the CAUV valuations issue.

Finnarn and others, working as Ohio Farmers United Against Unfair Taxation, have been circulating petitions at farmer gatherings for the past several months. The petitions have been spotted at meetings of the Ohio Farmers Union, Ohio Farm Bureau and at the recent Farm Progress Show in London, Ohio.

The petition lays out the case for what Finnarn and others believe is a broken promise made to farmers in the 1970s by current state legislators. It asks the governor and Ohio General Assembly to do three things to get CAUV valuations back in line with an agricultural landscape that is showing lower prices for commodities and increasing costs of production:

Please review the entire petition linked here. You may also download the petition and collect signatures in your own community. Completed petitions may be mailed to Ted Finnarn, 421 Public Square, Greenville, Ohio 45331. 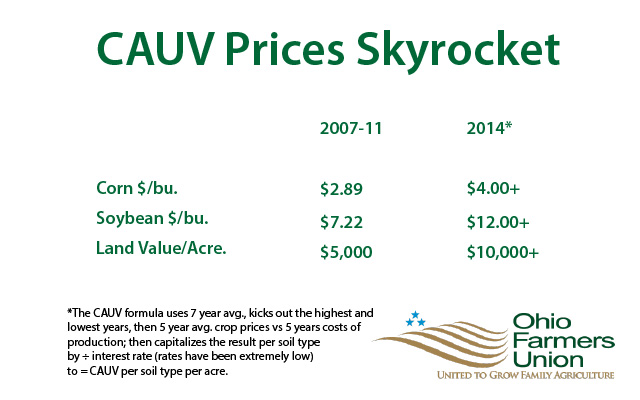 END_OF_DOCUMENT_TOKEN_TO_BE_REPLACED

Sponsored in part by the Ohio Farmers Union, this event is FREE and open to the public. People of African descent have a long … END_OF_DOCUMENT_TOKEN_TO_BE_REPLACED

Click Here to download the entire report in pdf. In a report released in late July, the U.S. Department of Agriculture (USDA) Agricultural … END_OF_DOCUMENT_TOKEN_TO_BE_REPLACED

Here is the registration link for the event - https://us02web.zoom.us/meeting/register/tZArcOygqDIoHdY7Xvr_eiViiK6yQ_QxaG9W … END_OF_DOCUMENT_TOKEN_TO_BE_REPLACED