While opponents of traditional family farming in Congress have blocked implementation of the Grain Inspection and Stockyards Protection Administration rule from the 2008 Farm Bill, the National Farmers Union has continued to lobby for full implementation of the rule which would add transparency and more competition to U.S. markets.

NFU and others got a boost recently when eight members of Congress sent USDA Secretary Tom Vilsack a letter renewing calls to finish the rule making on GIPSA.

That process could proceed more smoothly at USDA now that the anti-GIPSA riders have been removed from recent spending bills.

“Producers and consumers alike benefit from competitive and transparent markets… Deceptive, fraudulent, retaliatory, and anti-competitive practices have no place in a well-functioning market, and we need to have sound rules of the road to protect consumers, livestock producers and poultry growers in increasingly concentrated market environments,” the lawmakers stated in the letter.

Ohio’s own U.S. Rep. Marcy Kaptur, D-Toledo, signed the letter to Vilsack with three other representatives and four senators. You can read the letter here.

END_OF_DOCUMENT_TOKEN_TO_BE_REPLACED 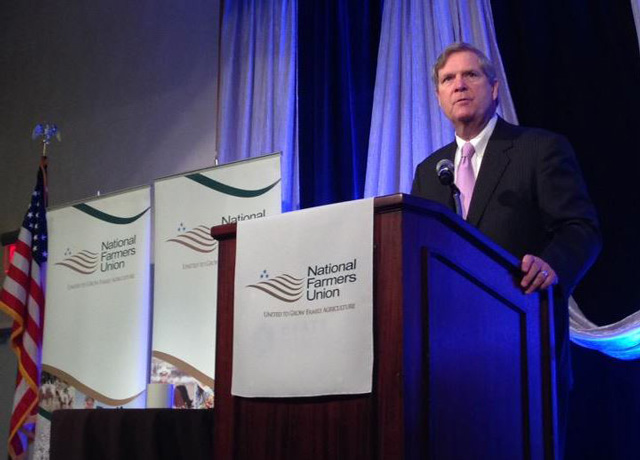 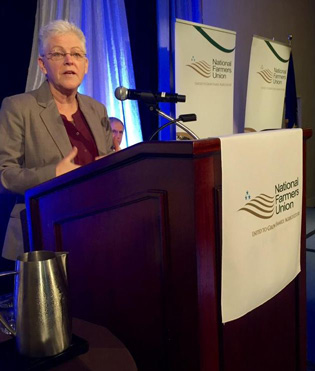 END_OF_DOCUMENT_TOKEN_TO_BE_REPLACED

COLUMBUS – U.S. Secretary of Agriculture Tom Vilsack will be speaking at the 80th Annual Ohio Farmers Union Convention tomorrow at noon at the Airport Marriott in Columbus.

The House voted yesterday to move the Farm Bill conference report forward. A Senate vote is expected next week. The Farm Bill and a new proposed EPA rule on the Renewable Fuel Standard are sure to be among topics covered during the Q&A with Secretary Vilsack and U.S. Sen. Sherrod Brown following their remarks.

Natural resource conservation is paramount to the ongoing strength of our nation. Healthy soil contributes to agricultural productivity. Healthy forests clean our water and air. Vibrant waterways are critical for our health, for transportation and for trade. Investments into conservation spur job growth and community development, particularly in rural areas.

This is an uncertain time for USDA conservation activities. Congress has not yet passed a comprehensive Food, Farm and Jobs Bill that would continue to invest in conservation efforts, while providing rural America with certainty regarding many other important programs.

As we continue urging Congress to provide a new Food, Farm and Jobs Bill, USDA this week took several new steps to strengthen conservation across the country.

END_OF_DOCUMENT_TOKEN_TO_BE_REPLACED

As the drought continues today, USDA and other Federal agencies are doing all we can to help farmers, ranchers and communities who have been impacted.

Unfortunately, our tools are limited. Due to inaction by Congress, many parts of the 2008 Farm Bill expired October 1, and other aspects of the law will expire in the coming months.

This brings tremendous uncertainty for rural families – particularly livestock producers who have lost access to disaster programs, and dairy producers who no longer have access to dairy support programs.

END_OF_DOCUMENT_TOKEN_TO_BE_REPLACED

Agriculture Secretary Tom Vilsack named Ohio’s John B. Motter along with sixteen others to the United Soybean Board this morning.

“These appointees represent a cross section of the soybean industry and I am confident that they will serve the soybean producers well,” said Vilsack.

The 69-member board is authorized by the Soybean Promotion, Research and Consumer Information Act. The Secretary selected the appointees from soybean producers nominated by Qualified State Soybean Boards. All appointees will serve 3-year terms beginning December 2012.

Research and promotion programs are industry-funded, authorized by Congress, and date back to 1966, when Congress passed the Cotton Research and Promotion Act. Since then, Congress has authorized the establishment of 20 research and promotion boards. They empower farmers and ranchers to leverage their own resources to develop new markets, strengthen existing markets, and conduct important research and promotion activities. AMS provides oversight, paid for by industry assessments, which ensures fiscal responsibility, program efficiency and fair treatment of participating stakeholders. 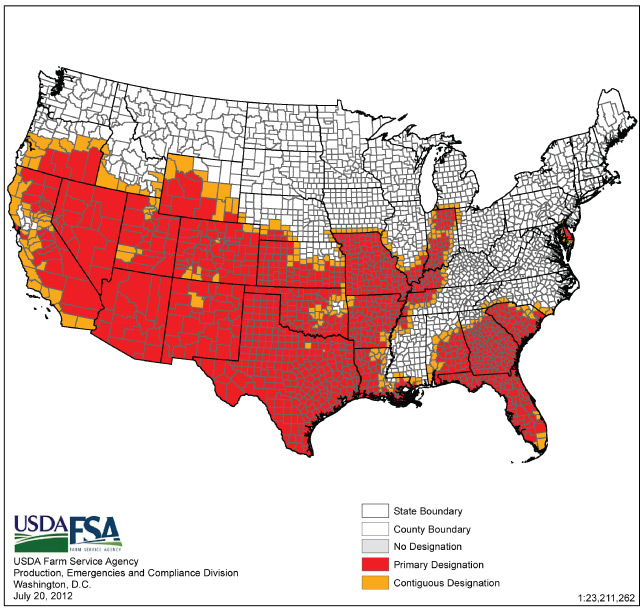 With 62 percent of U.S. farms currently affected by nationwide drought conditions, USDA Secretary Tom Vilsack announced today several ways in which the agency is attempting to make it easier for farmers and ranchers to get help.

“President Obama and I are committed to getting help to producers as soon as possible and sustaining the success of America’s rural communities through these difficult times,” said Vilsack. “Beginning today, USDA will open opportunities for haying and grazing on lands enrolled in conservation programs while providing additional financial and technical assistance to help landowners through this drought. And we will deliver greater peace of mind to farmers dealing with this worsening drought by encouraging crop insurance companies to work with farmers through this challenging period.”

END_OF_DOCUMENT_TOKEN_TO_BE_REPLACED

This is a column from USDA Secretary Tom Vilsack provided by the agency.

Since taking office, President Obama has been committed to an all-of-the-above approach that expands production of American energy resources. Already, there are signs that this strategy is making an impact. Last year, domestic oil production reached the highest level in nearly a decade. Imports of foreign oil fell to the lowest level in 16 years. We’re producing more natural gas than at any time in our history. Since 2008, renewable energy generation from sources like wind, solar, and geothermal has nearly doubled. And the Obama Administration has supported the first nuclear power plant in thirty years.

Strengthening the domestic biofuels industry has been another critical component of this overall strategy. And today, U.S. biofuel production is at its highest level in history. In fact, average monthly production increased more than 40 percent between 2008 and 2011. That means more jobs – especially in rural America – and greater energy security.

At USDA, we continue to support cutting-edge efforts to reduce America’s reliance on fossil fuel. For example, earlier this month, USDA announced approval of a $5 million payment to Western Plains Energy, LLC to support the construction of a biogas anaerobic digester in Oakley, KS. The completed project will utilize waste energy resources from a local cattle feedlot to replace almost 90 percent of the fossil fuels currently used by Western Plains Energy. In Blairstown, Iowa, USDA funding will be used to construct a 55,000 square foot facility that will produce cellulosic ethanol by converting municipal solid waste and other industrial pulps into advanced biofuels, as well as using conventional renewable biofuel derived from seed corn waste. When operational, the facility is expected to produce approximately 3.6 million gallons of cellulosic ethanol per year. Support for renewable energy projects such as these is an example of the many ways USDA is helping revitalize rural economies.

END_OF_DOCUMENT_TOKEN_TO_BE_REPLACED

Opportunity in local and regional food in America

by Secretary of Agriculture Tom Vilsack

Two and a half years ago, I announced a new initiative here at USDA called Know Your Farmer, Know Your Food.

It’s the public face of our commitment to help farmers and ranchers of all sizes take advantage of new opportunities, meet the growing demand for local and regional food and succeed in America’s diverse marketplace.

The Know Your Farmer, Know Your Food Compass is an electronic document and interactive map you can access online.

It can help you navigate USDA resources that support local and regional food systems. It introduces farmers, ranchers, businesses and communities around the country that are tapping into these opportunities to improve incomes and create jobs. It is a jumping off point so you can join the national conversation about where our food comes from.

END_OF_DOCUMENT_TOKEN_TO_BE_REPLACED

Annual Policy Priorities For the eighty-eighth year, the Ohio Farmers Union has established the organization's public policy priorities at the … END_OF_DOCUMENT_TOKEN_TO_BE_REPLACED

It's looking great for the first full, uninterrupted Ohio fair season since the beginning of the pandemic. Of special note, the Ohio State Fair will … END_OF_DOCUMENT_TOKEN_TO_BE_REPLACED

In a pleasant surprise for rural Ohio, the biennial budget was agreed to Monday with Gov. Mike DeWine's full $250 million funding request for rural … END_OF_DOCUMENT_TOKEN_TO_BE_REPLACED