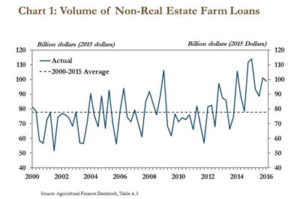 The Federal Reserve Bank of Kansas City said in late April that farm lending is robust and concluded in a report that, “Agricultural credit conditions deteriorated somewhat as repayment rates declined and delinquency rates picked up slightly alongside reduced farm income.”

In short, lower commodity prices, higher input prices and (in Ohio) higher taxes are having effects on farm credit – and therefore farm income.

“Farmers and ranchers are facing serious hardships as they deal with the financial challenges associated with the lean times we are in. The Federal Reserve’s assessment of farm credit conditions, with signs of deterioration and more challenging loan renewals has NFU very concerned about the hard times ahead,” said Roger Johnson, president of NFU.

There are twelve Federal Reserve Banks in the U.S. Each one is responsible for a portion of the country. Ohio’s Federal Reserve Bank is in Cleveland. Along with their regular duties, each of the banks also contributes to the nation’s economic data and research. The Kansas City bank covers regional issues like agricultural economics.

The K.C. Fed said non-real estate loans declined slightly so far in 2016, but the overall loan rate is higher.

“Producers, cash-strapped by persistently high input costs and low commodity prices, may experience trouble accessing credit, negative farm budgets and depressed markets if the trends continue as forecasted by the U.S. Department of Agriculture,” he explained to members of the committee.

Johnson pointed to the Farm Service Agency (FSA) loan portfolio as an indicator to measure the health of the farm sector. FSA loan demand is up 21 percent over the same time last year with $3.4 billion of the $6.47 billion in lending authority for fiscal year 2016 being utilized. The findings of the report expand on the narrative of the multitude of challenges faced by farmers and ranchers.

Large operating loans accounted for a significant share of the total loan volume growth, which could be due to the persistently high input costs and farm expansion, the report says. In addition, loan delinquency rates increased slightly and repayment rates declined; though, rates are still below the 15-year average.

Reduced cash flow and short-term liquidity problems have lenders seeking to restructure existing loans, leading to an increased demand for loan renewals and extensions, the report found. Banks reported slight increases to interest rates for higher-risk borrowers in an attempt to reduce their risk.

“The 1980’s constantly looms over us, and while conditions are different, today we must remain vigilant and provide support as we face a situation that is trending negative,” Johnson concluded.

Annual Policy Priorities For the eighty-eighth year, the Ohio Farmers Union has established the organization's public policy priorities at the … END_OF_DOCUMENT_TOKEN_TO_BE_REPLACED

It's looking great for the first full, uninterrupted Ohio fair season since the beginning of the pandemic. Of special note, the Ohio State Fair will … END_OF_DOCUMENT_TOKEN_TO_BE_REPLACED

In a pleasant surprise for rural Ohio, the biennial budget was agreed to Monday with Gov. Mike DeWine's full $250 million funding request for rural … END_OF_DOCUMENT_TOKEN_TO_BE_REPLACED