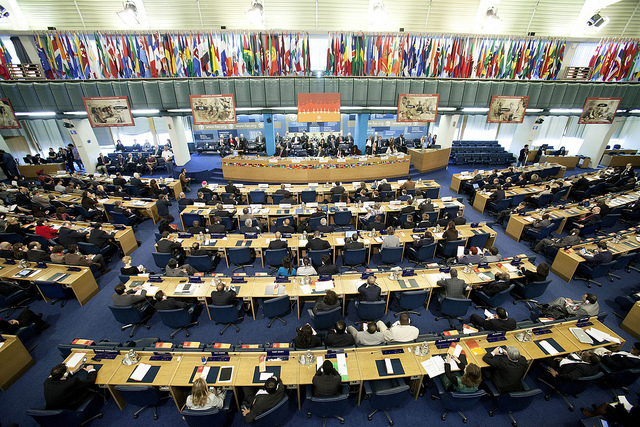 Agricultural cooperatives, already enriching millions of small-scale farmers, could expand and make an even greater contribution against poverty and hunger, if they were given the right support by governments, civil society and academia.

That is the key message of this year’s World Food Day, observed today in 150 countries. The theme this year focuses on “Agricultural cooperatives – key to feeding the world” and coincides with the International Year of Cooperatives. World Food Day also commemorates the date when FAO was founded in 1945.

The fight against hunger was given new impetus last week with the release of figures showing that, despite there being 132 million fewer hungry people in the world compared to 20 years ago, there are still nearly 870 million people who go without enough food every day,

“With cooperatives serving as an integral part of rural development, both domestically and internationally, it is only fitting that this year’s World Food Day observance highlights the vital importance and benefits of agricultural co-ops,” said National Farmers Union President Roger Johnson. “NFU and its members have a long history of promoting rural economic and cooperative development, which in turn help family farmers and ranchers add value to the food, fiber and energy they produce.”

NFU’s Director of Communications Melisa Augusto recently traveled to Senegal as part of the National Cooperative Business Association (NCBA) Farmer-to-Farmer Exchange program, which is involved in international cooperative development. In honor of World Food Day, Augusto spoke on a panel that highlighted the role of cooperatives in feeding the world hosted by NCBA.

“Through my travel to Senegal, I was able to see the impact of cooperatives internationally firsthand, and see how we are all connected,” said Augusto. “The opportunity to work with farmers on their own soil made the lessons meaningful to them, as well as furthered my appreciation for the small world we live in. The cooperative model has been successful in both developed and developing countries in helping to feed the world’s hungry.”

FAO Director-General José Graziano da Silva emphasized the need to work for the total eradication of hunger, adding that many countries, in South America, Africa and Asia, are proving that it is possible.

Graziano da Silva threw his weight behind cooperatives as a major way to lift small-scale farmers out of poverty and hunger. Although they produce most of the food in many countries, he said small-scale farmers had poor access to markets to sell their products, lack of bargaining power to buy inputs at better prices and a lack of access to financial services.

“Agricultural cooperatives can help smallholders overcome these constraints,” he said. “Cooperatives play a crucial role in generating employment, reducing poverty, and improving food security, and contributing to the gross domestic product in many countries.”

In a pleasant surprise for rural Ohio, the biennial budget was agreed to Monday with Gov. Mike DeWine's full $250 million funding request for rural … END_OF_DOCUMENT_TOKEN_TO_BE_REPLACED