One would think that if Congress were to take $3 billion out of the private sector crop insurance delivery system there would be hearings and lots of work done on the economics of the proposal by both sides of the issue.

You would be wrong to think that, because tomorrow there will be a vote in the U.S. House to accept a budget deal which contains what amounts to a $3 billion cut in the crop insurance subsidies that are so critical to the U.S. farm safety net.

According to the legislative shop at the National Farmers Union, this bit of business is such a surprise that both the House and Senate Agriculture Committees are lining up to oppose the entire budget deal if it contains this cut. NFU staff are all hands on deck canvassing members of Congress and senators all day today to oppose the deal. 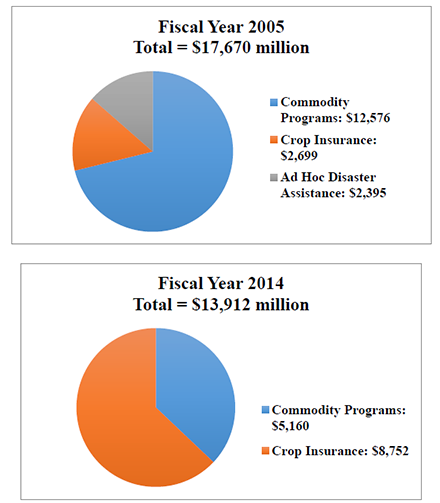 The national budget can’t be balanced on the backs of farmers. While it is true that this money will come out of the insurance industry, it’s also true that there will be a trickle down effect in rural America. The compromises that took so many years to forge in the last Farm Bill set up what is essentially a public-private system behind the safety net. It can’t just be torn down in a day.

Here’s a quote from an email I received today from a staffer at NFU that sums it up nicely:

While this is a direct hit to crop insurance companies, there can be no doubt about the trickledown effect onto the countryside.  Consolidation is already occurring in the crop insurance industry, and this will only speed up that consolidation, which will mean fewer choices and a less efficient private sector delivery system for producers.

And, if you think that farmers haven’t already done their piece for the national budget, consider the two charts pictured here. They speak for themselves.

Call your member of Congress and both of our U.S. Senators – Sherrod Brown and Rob Portman. You may call the Capitol Switchboard at (202) 224-3121 and ask for your representative or one of the senators. Tell them to vote NO on the budget deal if it contains the cut to the Private Sector Delivery System to Crop Insurance.

This is horrible policy and should be a poison pill to kill the whole deal.

Annual Policy Priorities For the eighty-eighth year, the Ohio Farmers Union has established the organization's public policy priorities at the … END_OF_DOCUMENT_TOKEN_TO_BE_REPLACED

It's looking great for the first full, uninterrupted Ohio fair season since the beginning of the pandemic. Of special note, the Ohio State Fair will … END_OF_DOCUMENT_TOKEN_TO_BE_REPLACED

In a pleasant surprise for rural Ohio, the biennial budget was agreed to Monday with Gov. Mike DeWine's full $250 million funding request for rural … END_OF_DOCUMENT_TOKEN_TO_BE_REPLACED