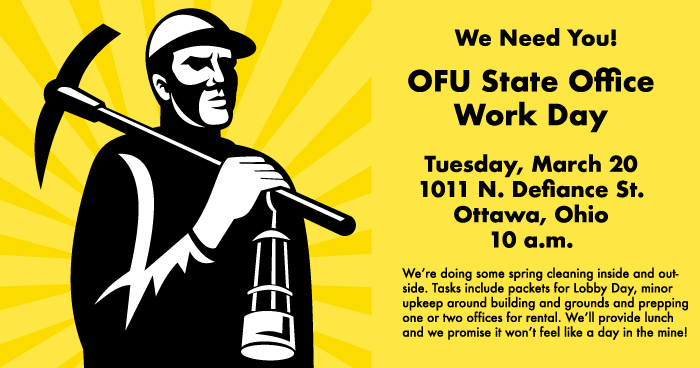 The Ohio Farmers Union has passed a “Special Order of Business” in at least the last three conventions calling on Ohio’s elected leaders in Columbus to preserve landmark, bipartisan legislation passed in 2008 which established energy efficiency and renewable energy mandates for Ohio’s public electrical utilities. Known as “25 by 2025” the 2008 law put utilities on a path toward ensuring that at least 25% of the power they sell in Ohio comes from renewable energy resources.

Despite the fact that the the evidence shows job creation, a reduction in air pollution and even an increase in Payments in Lieu of Taxes in areas where renewable energy projects are creating new businesses and jobs, a minority of well-connected Ohio business and political interests have sought to roll back the mandates on primarily ideological and narrow economic ground.

Here are just a few facts that came out over the course of testimony on S.B. 310:

Call Governor Kasich office today at (614) 466-3555. Give the receptionist your name and hometown and tell them you’re calling to urge the governor to VETO S.B. 310. Tell them you’re concerned about going backwards on air pollution and creating a more diversified energy economy. If you are involved in the renewable energy economy either on your own farm or in an off-farm career, let them know.

The governor is expected to sign S.B. 310, but I can tell you from experience working for members of Congress and former Gov. Strickland that these calls matter. Sometimes they even change minds.

Finally, send this email to your non-OFU friends and contacts. This bill really is a step backward for Ohio and serves only the interests of a very (politically connected) few.

If you’re not up to speed on MDIS – the Market Driven Inventory System being advocated for the next Farm Bill by the National Farmers Union, you should be – and so should your representatives in Congress.

MDIS is a farm program framework that smooths out market volatility and allows farmers to make their living on what they produce and not through government payments. NFU and the creators of MDIS, the University of Tennessee’s Agricultural Policy Analysis Center, have been working on research to show that MDIS would save taxpayers money by cutting direct government payments to farmers while continuing to provide a market stability-based security net.

“(MDIS) is an agricultural commodity program that mitigates price volatility, providing advantages to livestock producers, the biofuels industry, and to hungry people in this country and around the world. In addition, it would reduce government expenses, increase the value of crop exports, and maintain net farm income over time,” NFU President Roger Johnson recently told a Congressional committee.

Johnson and others have been educating Congress on MDIS, it’s time you learned more and joined the effort.

Go to the MDIS page at the NFU website. Familiarize yourself with some of the basics and ask yourself, “What would this policy mean for my farm and my business?”

Contact your legislator and let them know in your own words why you support MDIS in the Farm Bill. In Ohio our U.S. Senators are Sherrod Brown and Rob Portman – they need to hear from you and know this is a serious, win-win policy proposal for farmers and taxpayers. Follwing this link will take you to a tool where you can determine who your member of Congress is and contact them as well. Use the zip code lookup.

WINDSOR – Two chapters of the Ohio Farmers Union are sponsoring an informational meeting for farmers, rural residents and other interested parties on the subject of shale gas and oil exploration and drilling and the injection wells in the area used for waste water disposal.

Joe Logan, agricultural policy director for the Ohio Environmental Council will present along with members of the Ohio Farmers Union. The meeting will be held March 26, 6:30 p.m. at the Windsor Community Center. The community center is located at 5430 Mayfield Road, Windsor, Ohio. For information, the public may call 440-272-5154 or 440-272-5174.

END_OF_DOCUMENT_TOKEN_TO_BE_REPLACED

Sponsored in part by the Ohio Farmers Union, this event is FREE and open to the public. People of African descent have a long … END_OF_DOCUMENT_TOKEN_TO_BE_REPLACED

Click Here to download the entire report in pdf. In a report released in late July, the U.S. Department of Agriculture (USDA) Agricultural … END_OF_DOCUMENT_TOKEN_TO_BE_REPLACED

Here is the registration link for the event - https://us02web.zoom.us/meeting/register/tZArcOygqDIoHdY7Xvr_eiViiK6yQ_QxaG9W … END_OF_DOCUMENT_TOKEN_TO_BE_REPLACED