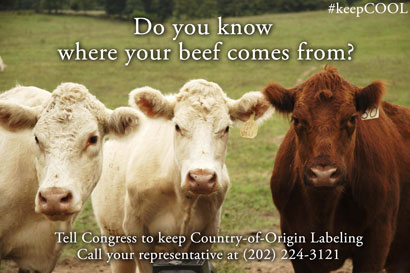 Here is a recent press release from National Farmers Union with more on the Stabenow-Hoeven bill and a link to an op-ed penned by NFU President Roger Johnson:

NFU President Roger Johnson explains in a recent Agri-Pulse guest column that, fortunately for all parties involved in the Country-of-Origin Labeling (COOL) dispute at the World Trade Organization (WTO), Sens. John Hoeven, R-North Dakota, Debbie Stabenow, D-Michigan, and a bipartisan group of cosponsors have introduced a COOL compromise bill that both meets our international trade obligations and maintains the integrity of the country-of-origin label.

“The Hoeven-Stabenow compromise is a win-win for everyone involved with the WTO dispute,” says Johnson. “It mandates the development of a clear, strong and honest ‘made in the USA’ label that we know consumers want, and it defangs the WTO ruling by making the law voluntary, not mandatory. Consumers win, producers win, our trading partners win and the WTO ruling becomes a moot point.”

Johnson says that as a direct result of the WTO ruling and the mounting pressure from Canada and Mexico’s unsubstantiated threats, the U.S. House of Representatives recently voted to repeal COOL altogether, despite the fact that consumers have clearly demonstrated their desire to buy locally. Currently, all eyes are on the Senate.

“Thankfully, a strong bipartisan compromise was introduced last week by Senators Hoeven and Stabenow that provides a path forward for COOL,” notes Johnson.

Johnson notes that a bill sponsored by Senate Agriculture Committee Chairman Pat Roberts would repeal COOL completely and allow packers to determine their own definition of what a product of the U.S. is. “The Hoeven-Stabenow alternative would prevent those packers from such deceptive practices by requiring that in order for any meat to be labeled as product of the U.S. that meat must be from an animal that was born, raised and slaughtered in the U.S.,” he says.

Johnson points out that Canada and Mexico both suggested the adoption of a voluntary system in the 2012 WTO Appellate Body Report, and the U.S. Trade Representative (USTR) noted that repealing the mandatory requirement and replacing it with a voluntary system has the ‘potential to constitute compliance with U.S. WTO obligations.’  “That gives voluntary COOL a green light in every direction,” he says.

Johnson points out that NFU has championed mandatory COOL for three decades, so this clearly wasn’t an easy pill to swallow. “But it is the only way to retain some semblance of clear and accurate food labeling that allows consumers to know where their food comes from, and it offers farmers and ranchers an avenue to allow that to happen.

“For those who champion country-of-origin food labeling, this is the only game in town. The bill is the only politically viable means of preventing Congress from completely stripping away a clear national label for livestock born, raised, and slaughtered in the U.S.”

Johnson points out that COOL is one of the organization’s signature issues, having spent   tens of thousands of dollars defending it in the courts and educating the public about the benefits of knowing where your food comes from.

“And it will remain one of our top priorities until the optional labeling law is finalized and these new labels are being used on meat products across the country.”

Johnson notes that while it might be hard to say, mandatory COOL is dead, and is simply awaiting its final burial. “Thankfully, many of us see the bright light at the end of the tunnel, and that light says voluntary labeling,” he notes. “And everyone who wants to preserve food labeling is walking in that direction.”

Annual Policy Priorities For the eighty-eighth year, the Ohio Farmers Union has established the organization's public policy priorities at the … END_OF_DOCUMENT_TOKEN_TO_BE_REPLACED

It's looking great for the first full, uninterrupted Ohio fair season since the beginning of the pandemic. Of special note, the Ohio State Fair will … END_OF_DOCUMENT_TOKEN_TO_BE_REPLACED

In a pleasant surprise for rural Ohio, the biennial budget was agreed to Monday with Gov. Mike DeWine's full $250 million funding request for rural … END_OF_DOCUMENT_TOKEN_TO_BE_REPLACED