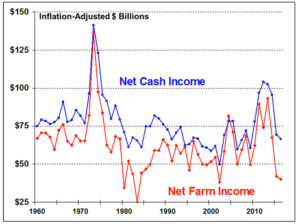 The National Farmers Union Board of Directors passed two policy resolutions in July regarding the worsening farm economy and continuing consolidation in the crop inputs and agriculture chemicals industries.

Ohio Farmers Union President Joe Logan, an NFU board member, attended the meeting in Healdsburg, California and voted in favor of both resolutions.

“As a farmer-led organization, we proudly advocate for the issues important to our nearly 200,000 family farm and ranch members. The farm economy and consolidation in agriculture are two timely industry topics, and these board-passed resolutions will define precise calls to action for our organization,” said NFU President Roger Johnson.

NFU has been a vocal advocate in support of a strong safety net to aid farmers as they continue to face low commodity prices and high input costs. The farm economy resolution calls for “corrective action and evaluation of price support levels” so that farm programs can serve to minimize the farm income drop.

“Research by NFU and others is showing that farm income this year is expected to be its lowest since 2002. NFU is trying mightily to sound the alarm with policy makers that family farms and rural economies are moving in the wrong direction in the greater economy,” Logan said.

The Congressional Research Service published a 2016 farm income outlook in February. It concluded in part: 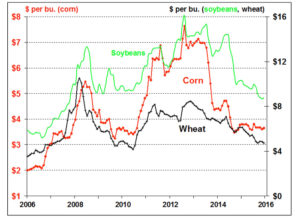 NFU is also concerned for dairy farmers. The resolution notes that milk prices are in the $12-$14 per cwt. range, a 50% drop from 2014 levels and, the average cost of production is above $17 per cwt.

The farm income resolutions calls for awareness among farmers and public officials that things are turning and that, farm programs should minimize the farm income drop and policy makers need to evaluate price support levels and take corrective actions to ensure “farm programs serve their purpose to stabilize farm income in low commodity price circles.”

Additionally, the board passed a resolution in support of more robust enforcement of antitrust laws as the agriculture inputs sector faces growing consolidation. NFU has strongly opposed further consolidation in agriculture due to the damaging effects of reduced competition on the economic viability of farmers and ranchers.

“We’ve been talking in Ohio and Washington, D.C. for many years about successive waves of mergers in agribusiness. While working farmers and consumers are always told these big businesses getting bigger will lead to so-called efficiencies, farmers continue to pay more for inputs every season and their choices in the marketplace simply decline,” Logan said.

“Family farmers and ranchers should call on their elected officials at the local, state and national levels to educate them about the economic problems facing our nation’s family farmers and ranchers,” explained Johnson, who testified on the state of the farm economy before a panel of the House Agriculture Subcommittee on General Farm Commodities and Risk Management earlier this year.

Both resolutions may be read in their entirety at ohfarmersunion.org – search “2016 NFU Board” on the homepage.

Annual Policy Priorities For the eighty-eighth year, the Ohio Farmers Union has established the organization's public policy priorities at the … END_OF_DOCUMENT_TOKEN_TO_BE_REPLACED

It's looking great for the first full, uninterrupted Ohio fair season since the beginning of the pandemic. Of special note, the Ohio State Fair will … END_OF_DOCUMENT_TOKEN_TO_BE_REPLACED

In a pleasant surprise for rural Ohio, the biennial budget was agreed to Monday with Gov. Mike DeWine's full $250 million funding request for rural … END_OF_DOCUMENT_TOKEN_TO_BE_REPLACED