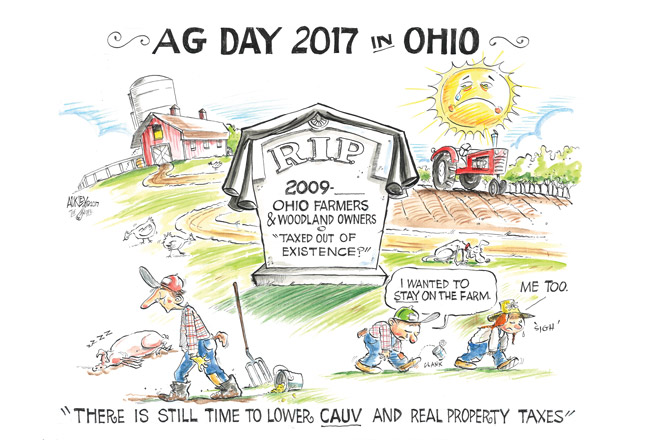 Finnarn is a decades-long member of the CAUV Advisory Committee to the Ohio Dept. of Taxation. He has worked behind the scenes in Columbus since at least 2011 when CAUV (Current Agricultural Use Valuation) tri-annual re-valuations at the county level began to skyrocket 100 to 300 percent. Since then, many Ohio counties have been through two cycles of their CAUV values going up triple digits each cycle. In some cases, farmers’ property tax bills have grown 600 percent or more over the past six to eight years.

For the past three years, Finnarn, has worked across the state putting together public meetings on the issue. In Plain City, he is expected to give his presentation on CAUV and why we have it and why it worked from the 1970s to just recently. He will explain the modest changes in the state formula that need to occur and inform farmers and rural landowners what they need to do to help push legislation pending in Columbus that would fix CAUV.

Also presenting will be Leah Curtis of the Ohio Farm Bureau Federation and Paul Mechling representing Ohio forest and woodland owners. Finnarn said there will also be farmland conservation and woodland preservation experts available to farmers to answer questions regarding their land.

Dessert will be provided compliments of the sponsors.

This meeting is targeted at Champaign, Delaware, Franklin, Logan, Madison and Union Counties, but anyone is invited.

Annual Policy Priorities For the eighty-eighth year, the Ohio Farmers Union has established the organization's public policy priorities at the … END_OF_DOCUMENT_TOKEN_TO_BE_REPLACED

It's looking great for the first full, uninterrupted Ohio fair season since the beginning of the pandemic. Of special note, the Ohio State Fair will … END_OF_DOCUMENT_TOKEN_TO_BE_REPLACED

In a pleasant surprise for rural Ohio, the biennial budget was agreed to Monday with Gov. Mike DeWine's full $250 million funding request for rural … END_OF_DOCUMENT_TOKEN_TO_BE_REPLACED