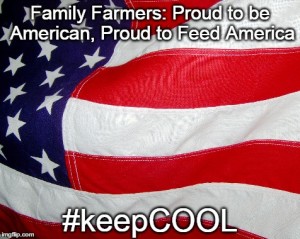 Joe Logan and Roger Wise are no strangers to the ongoing struggle in Washington, D.C. and Geneva, Switzerland over whether U.S. consumers have a right to know where their food comes from.

The pair are Ohio farmers but they are also the current president of the Ohio Farmers Union (Logan) and the immediate past-president (Wise). Since 2009, Country of Origin Labeling – “COOL” in agricultural circles – has been a recurring policy consideration for each.

COOL is a rule in the 2002 U.S. Farm Bill that mandates retailers provide country of origin labeling for beef, pork and lamb. In 2008, Congress expanded the labeling law to include some other products such as fresh fruits and nuts.

In 2009, the first challenge to COOL came from the Canadian government via the World Trade Organization. While Canada – and subsequently Mexico – have claimed that U.S. COOL rules have cost foreign producers, there is scant economic evidence to support their claims.

There has been, however, a sea change in ownership of U.S. meat interests. The primary owner of U.S. pork interests is now Shuanghui of China. JBS of Brazil is now the largest meat processing company in the United States. Both China and Brazil have issues regarding food safety.

“Yesterday’s WTO decision is an insult to all who wish to have information about the food they consume and an affront to our nation’s ability to adopt legislation that is strongly supported by US Farmers and consumers,” said Logan

“Once again, the Farmers Union will be leading the charge to defend COOL on behalf of farmers and consumers,” Logan said.

Johnson pointed out that there have been various press reports in recent weeks indicating that the administration will work with Canada and Mexico on COOL.

“We support that approach to the extent it results in a mutually agreed result that provides consumers meaningful information on the meat products they purchase, including the country where the animal was born, raised and slaughtered. With the significant interest by consumers in knowing where their food comes from, any other result is not acceptable,” Johnson said.

Logan, of Trumbull County, and Wise, of Sandusky County, have a full slate of meetings on Capitol Hill with members of Congress over the next two days. They are part of an NFU group of more than 60 Farmers Union leaders from around the country.

“Our primary message to Congress at this point is leave COOL alone,” said Wise.

“There is precedent for U.S. and international officials to work out their differences rather than scrap a U.S. law and start completely over,” he added.

In a pleasant surprise for rural Ohio, the biennial budget was agreed to Monday with Gov. Mike DeWine's full $250 million funding request for rural … END_OF_DOCUMENT_TOKEN_TO_BE_REPLACED