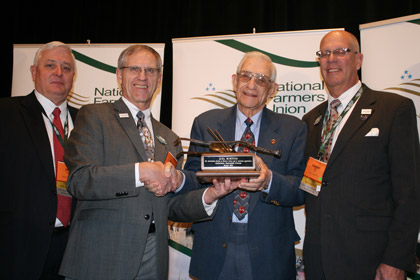 Meritorious Service Awards honor those who have made particularly noteworthy contributions to agriculture, humanity and Farmers Union. This honor is the highest award the NFU Board of Directors can bestow upon an individual.

“Mel Borton has dedicated six decades of his life to Farmers Union,” said NFU President Roger Johnson. “His passion for the organization has made him a true leader in membership growth and advocacy for U.S. family farmers, and for that we are grateful.”

Borton was born and raised on a farm in northwestern Ohio. He started farming on his own in 1948 as a sharecropper and joined Ohio Farmers Union that same year. He has held several leadership roles in Farmers Union and on other national committees. Today he continues to lobby on the state and national level on behalf of family farmers.

Before receiving his award, a video of congratulations from Ohio Farmers Union President Roger Wise was played for Borton and convention delegates and attendees.

“Mel has been an integral part of Ohio Farmers Union and National Farmers for many years,” Wise said. “When I was a young man and my Dad was on the OFU Executive Committee, Mel was one of the first people I met. He has been an important part of our organization nationally and in Ohio – he’s always advocating for family farmers.”

Annual Policy Priorities For the eighty-eighth year, the Ohio Farmers Union has established the organization's public policy priorities at the … END_OF_DOCUMENT_TOKEN_TO_BE_REPLACED

It's looking great for the first full, uninterrupted Ohio fair season since the beginning of the pandemic. Of special note, the Ohio State Fair will … END_OF_DOCUMENT_TOKEN_TO_BE_REPLACED

In a pleasant surprise for rural Ohio, the biennial budget was agreed to Monday with Gov. Mike DeWine's full $250 million funding request for rural … END_OF_DOCUMENT_TOKEN_TO_BE_REPLACED