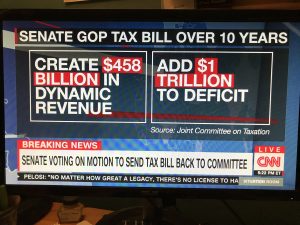 COLUMBUS – The Ohio Farmers Union today called on U.S. Sen. Rob Portman to vote ‘no’ on the major tax bill pending in the upper body of Congress.

“While the stated intentions of this bill are tax reductions for the middle class, it’s poor design and $1.5 trillion price tag will have far reaching and negative unintended consequences,” said OFU President Joe Logan.

Logan said the bill’s estimated trillion-dollar plus addition to U.S. deficit spending over the next several years will trigger a cascade of cuts from Medicare to USDA programs like Agriculture Risk Coverage and Price Loss Coverage.

“Existing federal budget ‘pay-go’ rules would require the elimination of virtually all discretionary spending, including many farm programs due to this tax bill’s cost,” Logan said.

According to the Congressional Joint Committee on Taxation and Congressional Budget Office – both non-partisan – by 2027 people earning between $40,000 to $50,000 will be paying a combined $5.3 billion more annually in taxes as compared to today. The same sources report million dollar earners will be paying $5.8 billion less 10 years from now.

“This bill is not fair to the middle class and hardworking people like family farmers,” Logan said. “While tax treatments that benefit the wealthy and corporate America don’t sunset under this bill, anything of substance that benefits working people does.”

“It’s my hope Sen. Portman will build on the ‘moderate’ label he has cultivated and vote against this bill. There is very little here that will ultimately move the needle in the right direction for rural Ohio – or the overwhelming majority of his constituents,” Logan said.

Annual Policy Priorities For the eighty-eighth year, the Ohio Farmers Union has established the organization's public policy priorities at the … END_OF_DOCUMENT_TOKEN_TO_BE_REPLACED

It's looking great for the first full, uninterrupted Ohio fair season since the beginning of the pandemic. Of special note, the Ohio State Fair will … END_OF_DOCUMENT_TOKEN_TO_BE_REPLACED

In a pleasant surprise for rural Ohio, the biennial budget was agreed to Monday with Gov. Mike DeWine's full $250 million funding request for rural … END_OF_DOCUMENT_TOKEN_TO_BE_REPLACED