The Ohio Farmers Union has come out in support of efforts to repeal S.B. 5 – the unfair attack on Ohio public worker rights – and announced on Tuesday its endorsement of We Are Ohio and a ‘no’ vote on State Issue 2 this fall.

“As we stand in the shadow of Labor Day, there’s no better time for the Ohio Farmers Union to stand up for public servants and the middle class in Ohio,” said Roger Wise, OFU president.

“I would urge every Ohio voter to vote ‘no’ on State Issue 2 in the fall. Senate Bill 5 was an over-reach on the part of the governor and the Ohio General Assembly. Police, Fire Fighters, Teachers, and other public workers are not the source of Ohio’s economic problems,” Wise said. 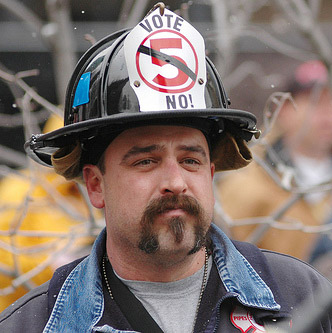 “It’s really incredible that supporters of S.B. 5 would use economic arguments to attack the rights of workers to collectively bargain when we live in the context of an American economy that has been brutal on workers and the middle class for the past several years. Our state and our nation suffer from a complex set of challenges, including destructive trade policy, inadequate regulation of Wall Street, and the general failure of multinational corporations to reinvest in America,” Wise said.

Wise also pointed out that during the last state worker labor negotiations in 2009, unionized employees of the state of Ohio gave up $238 million in wages and benefits for the first two years of the current, three-year contract. These givebacks came in the midst of a sour economy and while the administration of former Gov. Ted Strickland was shedding some 5,000 state workers over the course of his four-year term. State workers agreed to furloughs, wage freezes and to pick up a greater percentage of the cost of their health care benefits.

“All one needs to do is pick up a local newspaper and see that the economy has lead to cuts in the numbers of first responders and teachers throughout Ohio. School boards, cities and village councils OK public worker contracts through the collective bargaining process which lends stability and predictability to public service funding,” Wise said.

The Ohio Farmers Union is a membership organization which advocates on behalf of family farmers, rural residents and consumers. OFU is chartered through the National Farmers Union which began in the early 20th century when Texas farmers organized against price fixing in the cotton market. At the core of its mission is advocacy for the rights of family farmers, local economies and a level playing field for small farmers in relation to corporate mega farms and industrial scale livestock operations.

Annual Policy Priorities For the eighty-eighth year, the Ohio Farmers Union has established the organization's public policy priorities at the … END_OF_DOCUMENT_TOKEN_TO_BE_REPLACED

It's looking great for the first full, uninterrupted Ohio fair season since the beginning of the pandemic. Of special note, the Ohio State Fair will … END_OF_DOCUMENT_TOKEN_TO_BE_REPLACED

In a pleasant surprise for rural Ohio, the biennial budget was agreed to Monday with Gov. Mike DeWine's full $250 million funding request for rural … END_OF_DOCUMENT_TOKEN_TO_BE_REPLACED