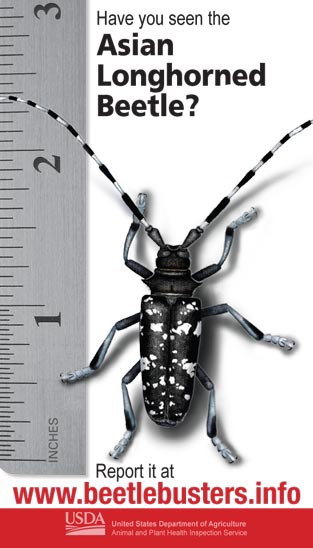 The U.S. and Ohio Departments of Agriculture want you to know about an invasive species which threatens our trees.

First discovered in the U.S. in 1996, Asian longhorned beetles attack several species of trees including maple, willow, horsechestnut, buckeye, and American elm. While in its larvae
stage, the beetle kills trees by tunneling into large branches and the trunk.

Ohio is the fifth state to detect ALB, which APHIS confirmed in Bethel after a citizen reported finding unusual damage in three maple trees to an Ohio Department of Natural Resources Division of Forestry service forester. Previous infestations sites, where the beetles are being successfully contained, include Illinois, Massachusetts, New Jersey and New York.

The Ohio Dept. of Agriculture urges citizens to report any signs of the Asian longhorned beetle by calling the toll free hotline 855-252-6450.

Annual Policy Priorities For the eighty-eighth year, the Ohio Farmers Union has established the organization's public policy priorities at the … END_OF_DOCUMENT_TOKEN_TO_BE_REPLACED

It's looking great for the first full, uninterrupted Ohio fair season since the beginning of the pandemic. Of special note, the Ohio State Fair will … END_OF_DOCUMENT_TOKEN_TO_BE_REPLACED

In a pleasant surprise for rural Ohio, the biennial budget was agreed to Monday with Gov. Mike DeWine's full $250 million funding request for rural … END_OF_DOCUMENT_TOKEN_TO_BE_REPLACED