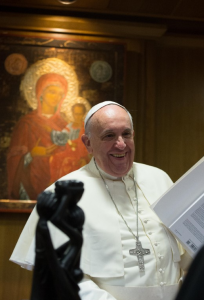 National Farmers Union President Roger Johnson welcomed the attention to agriculture and climate brought on by the encyclical. “Family farmers and ranchers are on the front line in climate change and their stewardship of the land and management of our scarce resources is critical to the health of our planet,” he said.

Pope Francis’ encyclical and its implications for agriculture resonate with St. Pope John Paul the Great’s comments to American farmers during his visit to Des Moines, Iowa in 1979, when he said that farmers are called by God to be thankful, generous and good stewards of His creation.

CRL is dedicated to advancing this vocational vision of agriculture, and is in the midst of its Faith, Food & the Environment project, which aims to equip farmers and food leaders with practical ways of incorporating their faith into their work. The organization is hosting an international symposium next week in Milan, in which top Vatican official Cardinal Peter Turkson will help unpack Laudato Si’ and its implications for farming.

In a pleasant surprise for rural Ohio, the biennial budget was agreed to Monday with Gov. Mike DeWine's full $250 million funding request for rural … END_OF_DOCUMENT_TOKEN_TO_BE_REPLACED