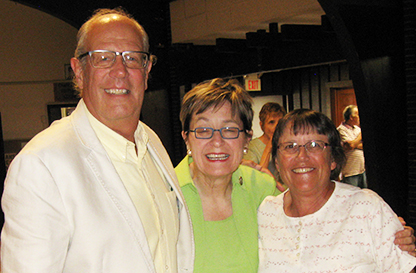 My name is Roger Wise and I am a 4th generation full-time family
farmer and have been so for more than 40 years. I am here today on
behalf of the Ohio and National Farmrs Union. NFU is the oldest
active farm organization in the country, advocating since 1902. Ohio
has been chartered since 1934. Nationally we represent over 200,000
family farmers and ranchers and fishers. Here in Ohio we tout 2500 of
those members. Four of them are here with me today, Marge and Mardy
Townsend from Astabula County, and of course Congresswoman Kaptur.
The Farmers Union organization works through grassroots driven policy
to improve the well-being and quality of life for family farmers,
ranchers, fishers and rural communities. Each year at our national
fly in we bestow on like minded members of Congress our most
prestigious award, the Golden Triangle. Rep Kaptur has received it
more than 25 years running, more than any other legislator; and we are
grateful for her support.

I remember vividly when then Secretary of Agriculture, Earl Butz
declared the United States would plant “fence row to fence row” and we
would export our nation to prosperity and feed the world along the
way. That 70’s expansion lasted only a few years because American
farmers soon produced massive surpluses, interest rates, inflation and
input costs skyrocketed, prices plummeted and competing countries
developed their own farming techniques. The farm crises of the 80’s
began and lasted for the next 25 years. Farm program payments
accounted for 50% of farm income. The mantra was that profit came in
“economies of scale”, and we must “get big or get out”. Many family
farmers and ranchers did exactly that, some by choice, many by the
force of the bank.

Trade agreement seeds were planted and gathered momentum in the 80’s.
NAFTA was the poster child. Assurances were given that no jobs would
be lost, in fact, many more would be created; and the economies of the
United States, Mexico and Canada would explode for the benefit of the
people in all 3 countries. President Clinton signed on to the
agreement ensuring us this would be the economic model for the world.

Now, 25 years later we know the rosy assumptions and predictions did
not play out in reality like they did on paper. American workers lost
their manufacturing jobs to low wage Mexican workers who were also
decimated, product quality eroded, unions were decimated, family
farmers either quit or were forced out of business, the middle class
began to shrink and the trade deficit began to climb.

Agriculture, however, through it all was championed because the
United States consistently enjoyed trade surpluses primarily from corn
and soy exports. Unfortunately though, family farmers, ranchers and
consumers did not the benefit from NAFTA. With the exception of the
boom years 2008-2013, which were due to the Renewable Fuel Standard,
not NAFTA, close inspection reveals vertically integrated multi-
national companies reaped the profits while farmers in all 3 countries
saw margins decline to the point of non-profitability; and all the
while our trade deficits soared. Additionally, trade deals opened the
door to consolidation and mega-mergers which led to less competition,
non-competitive markets, higher costs, fewer choices and reduced
research and development. An example of the latter is herbicide weed
resistance.

For decades Country of Origin Labeling, “COOL” has been the signature
issue the Farmers Union. We pushed for its passage with great vigor
because it benefits producers and 95 % of consumers support it.
Simply, it requires beef pork and poultry to be labeled with the
country from which these products came. Rep. Kaptur has been
indefatigable promoting this issue. In fact, she is more steadfast
supporting and promoting COOL than any congressperson in D.C. and we
are grateful for her efforts. This requirement is not unique in that
virtually all of our trading partners have a form of COOL and all of
them are WTO compliant.

Our coalition efforts paid off in 2002, when COOL was included in the
Farm Bill. Unfortunately, special interests, uncaring about its
popularity and practicality, lobbied to prevent its funding and the
measure was not implemented. Our efforts continued and in the 2008
Farm Bill COOL was mandatory and it became law of the land.
Again special interests went to work to derail the law. They
challenged it 3 times in Federal Court and lost each time. Undeterred
and well financed, Canada and Mexico were coerced into filing suit
with the WTO. Ironically the tribunal was chaired by none other than
Mexico. With the deck clearly stacked against us, our case was lost
and Congress, under bogus threats of economic reprisals repealed COOL.
For NAFTA to be meaningfully renegotiated, re-instating COOL must be
a high priority for the benefit of farmers and consumers.

Food production and its safety are national security issues as well
as an economic ones. Trade agreements have led to reduced border
inspections of food imports. Further, these agreements have deemed
other countries less stringent safety regulations adequate for our
import inspections. This relaxing of regulations puts our farmers and
ranchers at a disadvantage because our products are routinely of
higher quality.

Currency manipulation and the overvalued U.S. dollar makes our
exports more expensive relegating us to the supplier of last resort
which also adds to the trade deficit.

Farmers and ranchers were not helped by America’s withdrawal from the
Paris Climate Agreement. Farmers are poised to help mitigate climate
change both here and around the world through conservation, carbon
sequestration and other initiatives to assure sustainability for
decades to come. Climate change must be part of any meaningful trade
agreement based on public funded, peer reviewed science based
research.

To conclude, the record must be clear. NFU is not anti trade or
protectionist. We are keenly aware that the economy is global and
trade is a critical component of world economics. We do, however,
believe that trade deals should benefit farmers and workers in all
countries. Living wages, competitive markets, with safety and
welfare in the work place guaranteed; and all nations must strive for
a clean and healthy environment to preserve our planet for centuries
hence. Only then will trade be fair and our deficit decline.

Annual Policy Priorities For the eighty-eighth year, the Ohio Farmers Union has established the organization's public policy priorities at the … END_OF_DOCUMENT_TOKEN_TO_BE_REPLACED

It's looking great for the first full, uninterrupted Ohio fair season since the beginning of the pandemic. Of special note, the Ohio State Fair will … END_OF_DOCUMENT_TOKEN_TO_BE_REPLACED

In a pleasant surprise for rural Ohio, the biennial budget was agreed to Monday with Gov. Mike DeWine's full $250 million funding request for rural … END_OF_DOCUMENT_TOKEN_TO_BE_REPLACED