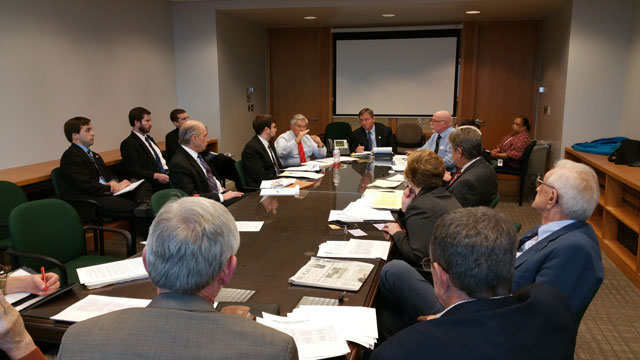 OFU leaders and other CAUV stakeholders meet with State Rep. John Patterson and Vice Chairman of the House Ways and Means Committee Gary Scherer in December.

This past week OFU President Joe Logan, Executive Director Linda Borton and myself spent Wednesday at the Statehouse talking to legislators and the Senate Agriculture Committee about H.B. 490. Additionally, we delivered written testimony to Senate Ag from Ashtabula/Lake/Geauga Farmers Union President Mardy Townsend on 490.

OFU continues to urge members to contact their state legislators regarding the insertion of anti-consumer telecommunications language by the House Agriculture and Natural Resources Committee. The language would allow telephone service providers to abandon their landline (copper wire) service to Ohio residents. OFU opposes this measure due to the fact that many rural residents would not have a viable option from the standpoints of reliability and cost in place of their traditional landline telephone service. The language put into the bill does contain any guarantees regarding consumers.

As for the rest of this bill – and you can get background here – since the election, House Republicans watered down some of the regulatory measures regarding horizontal well drillers and frack water disposal, but on the whole there is still some progress in terms of greater scrutiny of frack water disposal and stiffer penalties for willful polluters. On the ag front, a ban on application of fertilizers (and manure) on frozen, snow covered or saturated ground was put in the bill in the House. This prohibition applies only to the western basin of Lake Erie.

OFU leaders also met with State Rep. John Patterson and Vice Chairman of the House Ways and Means Committee Gary Scherer on the problems with the CAUV or Current Agricultural Use Value, property tax system. State legislators are getting plenty of calls regarding the wild upward fluctuations in CAUV values around the state. Patterson created a task force in northeast Ohio to document the problem and propose remedies for the Kasich Administration and lawmakers. While it appears no fix will be available for 2014, legislators and others we spoke to this past week believe there will be CAUV reforms in early 2015.

In a pleasant surprise for rural Ohio, the biennial budget was agreed to Monday with Gov. Mike DeWine's full $250 million funding request for rural … END_OF_DOCUMENT_TOKEN_TO_BE_REPLACED