Vilsack thanked OFU members and told them they were well represented by National Farmers Union in Washington. In particular, Vilsack said that Farmers Union lobbying was greatly responsible for saving Country of Origin Labeling for U.S. meat products. 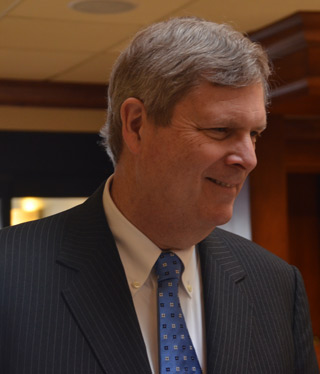 Secretary of Agriculture Tom Vilsack at the 2014 convention.

Vilsack also told OFU that as rural populations decline and the number of farmers grows smaller in America, agriculture remains as important as ever and the human values coming from the farm and small towns are irreplaceable. He implored OFU members to remain politically active and maintain a strong voice for rural America.

“I think it is important and necessary that we explain to our friends in cities and suburbs why farmers need these safety nets,” Vilsack said of the Farm Bill. 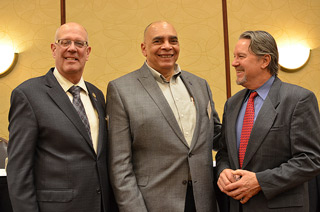 OFU also elected a new president, Joe Logan of Trumbull County. Logan was nominated by outgoing president Roger Wise who served OFU through six years which included navigating the organization through some tough times including replacing an insurance business partnership with its current property and casualty partner Hastings Mutual Insurance. Wise also began a strategic plan process in 2013 that is aimed at further boosting membership and kick-starting youth and other programming. Wise will continue to serve on OFU’s executive committee.

“The Ohio Farmers Union provides a unique and much needed voice for independent family farmers and consumers, concerning critical issues like market fairness, food quality and safety, and the environmental impacts and husbandry practices of modern industrialized agriculture,” said Logan.

“I am honored to have the opportunity to lead an organization like OFU. Our members have steadfastly advocated for farm and economic policies that promote opportunity and fairness for family farms and rural communities, while promoting variety, quality and transparency in our food systems. I wish to thank Roger wise for providing excellent leadership over the past six years at OFU. His steady hand helped the organization negotiate some turbulent times, and I will be gratified to have his counsel over the coming years,” Logan added.

OFU convention delegates also approved a slate of policy priorities for 2014 in a ‘special orders of business’ document. The effects of shale gas boom in large swathes of rural Ohio and current weaknesses in the state’s regulatory regime led the topics of debate.

“A big challenge – and one we accept – is to work with others across the state and ensure the oil and gas industry isn’t given carte blanche to operate in rural Ohio for a decade or two and leave our farmland, air and water in worse shape than they found it,” Logan said.

OFU is sticking to previous policy regarding severance taxes. The organization supports increasing the tax on the oil and gas industry and would support proceeds funding environmental mitigation efforts, infrastructure and education in shale counties, restoration of the state’s Local Government Fund to previous levels, funding additional state regulatory efforts as outlined by OFU and funding an enhanced ‘orphan well’ identification and plugging program.

The Ohio Farmers Union is a family farmer and consumer organization with over 4,000 members in Ohio working on legislative issues in the state which affect family-sized, independent producers as well as cooperative education and marketing efforts for family farmers.

Annual Policy Priorities For the eighty-eighth year, the Ohio Farmers Union has established the organization's public policy priorities at the … END_OF_DOCUMENT_TOKEN_TO_BE_REPLACED

It's looking great for the first full, uninterrupted Ohio fair season since the beginning of the pandemic. Of special note, the Ohio State Fair will … END_OF_DOCUMENT_TOKEN_TO_BE_REPLACED

In a pleasant surprise for rural Ohio, the biennial budget was agreed to Monday with Gov. Mike DeWine's full $250 million funding request for rural … END_OF_DOCUMENT_TOKEN_TO_BE_REPLACED