END_OF_DOCUMENT_TOKEN_TO_BE_REPLACED

“While the Final Rule is a good first step, it is certainly not a last step. We are disappointed that Congress passed a Fiscal Year 2012 appropriations bill that prevents additional portions of the rule from advancing. In particular, it is critical that the competitive injury portion of the rule be implemented. Currently, a producer must prove that a packer’s anti-competitive practices damaged the entire marketplace. Clarification of competitive injury is needed so that the producer would only have to prove that his or her operation was hurt by such actions, a much more reasonable standard. In choosing to prevent the competitive injury portion of the rule from moving forward, Congress has clearly chosen to put the interests of large packers ahead of family farmers and ranchers.

“After more than one year of discussion and more than 60,000 comments received, USDA has issued a Final Rule that provides some protection to family farmers and ranchers across the country. This rule will make the livestock market at least somewhat more transparent and fair. The rule clarifies whether the requirement of additional capital investments for poultry growers and swine producers violates the Packers and Stockyards Act, and ensures poultry dealers have a reasonable period of time to remedy a breach of contract.

“We will continue working with this administration and Congress to ensure that family farmers and ranchers are able to compete in a fair and open marketplace.”

The five Ohioans are:

“Recipients of the Golden Triangle Award have been strong advocates for family farmers and ranchers, and exhibit similar principles and policies to Farmers Union,” said NFU President Roger Johnson. “We are pleased to honor those who have proven to be true allies of our organization and our members across the country.”

Roger Wise, president of the Ohio Farmers Union said, “These members of Congress get it. The deck is stacked against family farmers and rural communities when it comes to policy and legislation. All five of these representatives have worked to ensure that our local economies are not left out in the cold when the big money interests show up on Capitol Hill.”

END_OF_DOCUMENT_TOKEN_TO_BE_REPLACED 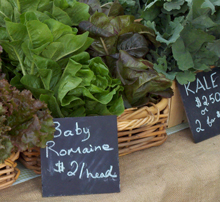 The U.S. Department of Agriculture (USDA) recently published a proposed rule to establish a national marketing agreement regulating leafy green vegetables. This rulemaking was the result of a request by the largest players in the industry, who asked for regulations based on the statewide agreements established in California and Arizona in the wake of the 2006 E. coli outbreak in California spinach.

If this agreement moves forward, it will provide the largest produce handlers (processors, shippers and packers of leafy green vegetables) the power to establish on-farm practices for all growers of leafy greens, regardless of size.

END_OF_DOCUMENT_TOKEN_TO_BE_REPLACED

The Ohio Dept. of Agriculture has announced a new $75 fee on the weights and measures devices used by many farmers.

Devices covered by the new fee include:

An ODA fact sheet on the fee may be downloaded here.

Annual Policy Priorities For the eighty-eighth year, the Ohio Farmers Union has established the organization's public policy priorities at the … END_OF_DOCUMENT_TOKEN_TO_BE_REPLACED

It's looking great for the first full, uninterrupted Ohio fair season since the beginning of the pandemic. Of special note, the Ohio State Fair will … END_OF_DOCUMENT_TOKEN_TO_BE_REPLACED

In a pleasant surprise for rural Ohio, the biennial budget was agreed to Monday with Gov. Mike DeWine's full $250 million funding request for rural … END_OF_DOCUMENT_TOKEN_TO_BE_REPLACED