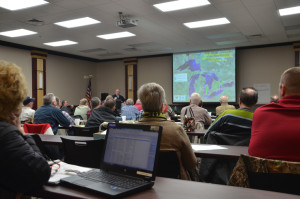 OTTAWA – State and federal experts on agriculture and water quality gathered in Ottawa today to explain what’s causing harmful algal blooms (HAB) in the western basin of Lake Erie and what farmers can do to help alleviate the problem.

The Ohio Farmers Union and the Ohio Environmental Council sponsored the forum. Farmers in attendance were from northwest and west central Ohio in the heart of the Maumee River watershed.

“These gatherings are important to keep getting the message that Lake Erie can be restored and farmers will do their part,” said Ohio Farmers Union President Joe Logan.

“Farmers also come away with a great deal of information about best management practices in dealing with nutrients and keeping as much as fertilizer on their fields and out of our streams and lakes,” Logan added.

Dr. Jeffrey Reutter, director of Ohio Sea Grant and a researcher who has studied Lake Erie since the 1970s, told the gathering that Lake Erie is unique among the Great Lakes due to its relatively shallow depth and the rate at which water flushes out of the lake. In the western basin, where the algal blooms generally begin and are at their worst, Reutter said the flush out rate is 20 to 50 days.

He demonstrated that phosphorous overload in Lake Erie is indeed at the root of the HAB problem and that reducing the amount of phosphorous by 40 percent would curtail the blooms.

Reutter points to the fact that the lake was cleaned up in the 1970s and told the forum that it can happen again.

Also presenting was Greg LaBarge from the Ohio State University Extension. LaBarge explained the state’s new fertilizer applicator certification that must be completed by producers farming more than 50 acres by Sept. 30, 2017. To date well over 1,000 farmers have completed the training and in the coming months another 7,000 are expected to get certified. LaBarge said there are approximately 40,000 farmers with more than 50 acres in production in the state.

An agronomist who specializes in fields, LaBarge gave examples of several best practices already in use by many Ohio farmers. He said that there are a few other items that should get more attention by producers. Among these are efforts to slow down the movement of water off of a farmer’s land, looking at each field and its risk profile separately and building up soil quality. 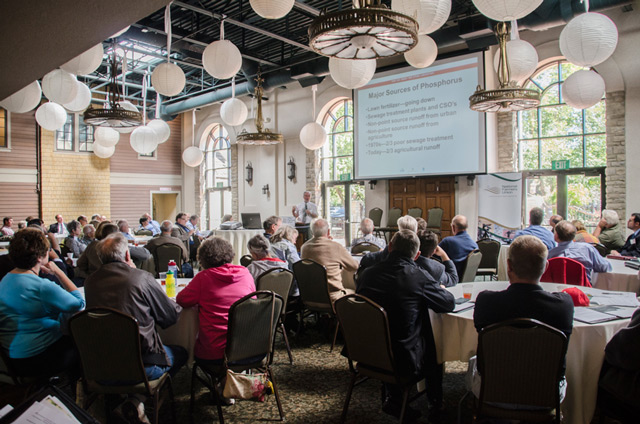 I’m working on a story and our own video coverage from what turned out to be an excellent set of presentations from Dr. Jeff Reutter, Ohio Sea Grant; Greg LaBarge, OSU Extension; Todd Hesterman, farmer and NW Ohio Coordinator of Conservation in Action and Adam Rissien from the Ohio Environmental Council. For now, find below the PowerPoint presentations from our presenters and links to media coverage of the event. Thanks to all who attended and to our presenters!

Annual Policy Priorities For the eighty-eighth year, the Ohio Farmers Union has established the organization's public policy priorities at the … END_OF_DOCUMENT_TOKEN_TO_BE_REPLACED

It's looking great for the first full, uninterrupted Ohio fair season since the beginning of the pandemic. Of special note, the Ohio State Fair will … END_OF_DOCUMENT_TOKEN_TO_BE_REPLACED

In a pleasant surprise for rural Ohio, the biennial budget was agreed to Monday with Gov. Mike DeWine's full $250 million funding request for rural … END_OF_DOCUMENT_TOKEN_TO_BE_REPLACED